Airborne Laser Scanning with a UAS 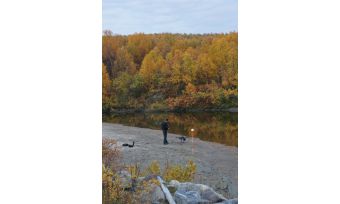 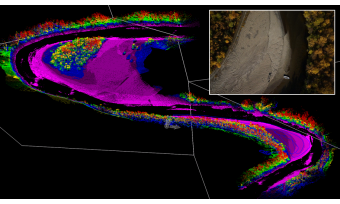 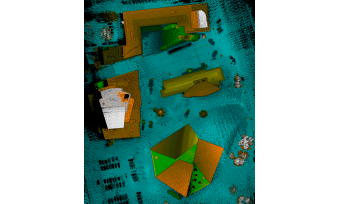 Airborne laser scanning (ALS) offers a range of opportunities for mapping and change detection. However, due to the large costs typically associated with traditional ALS, multi-temporal laser surveys are still rarely studied and applied. Unmanned aerial systems (UASs) offer new ways to perform laser scanning surveys in a more cost-effective way, which opens doors to many new change-detection applications. What are the differences in suitability between the two main types of UAS platforms – fixed-wing systems and rotorcraft – and what is the current state of the art in UAS-compatible laser scanning systems? Read on to find out.

The use of UASs for laser scanning is a relatively new area of research and applications. One of the starting points in 2006 was a remotely controlled helicopter supplied with navigation sensors and a laser range finder (altimeter) suitable for topographic surveys. The use of larger UASs with laser scanners has been studied for almost a decade now and is fuelling plenty of discussion about the possibilities of UAS-based laser scanning in the industry.

UASs can generally be categorised into two types: fixed-wing aircraft and rotorcraft. Each type is suitable for specific applications and tasks. Fixed-wing systems typically provide users with a longer operation time and support larger payloads due to better fuel economy. Fixed-wing systems also allow for more speed, which makes this type of UAS more suitable for large areas or long-distance missions. The fixed-wing platform is more stable in flight than a rotary-wing platform, the latter struggling with inertia in a more complex way. On the other hand, fixed-wing systems need more space at turns, thereby increasing the path length and decreasing efficiency. In addition, fixed-wing UASs need more space for take-off and landing, which makes them less suitable for remote areas where little or no infrastructure is present. From a data acquisition perspective, the higher speed of fixed-wing platforms reduces data density or requires more-expensive high-performance sensors to reach a certain point density. In summary, these restrictions make a fixed-wing platform less favourable for small-area surveys with complex terrain or objects rich in features that need to be captured. In contrast, rotorcraft allow for slow or even stationary flight speeds. They offer excellent manoeuvrability and do not require an airstrip for take-off and landing. This enables the use of relatively low-cost sensors, which makes UAS-based laser scanning accessible to a wider user community.

There are several industrial scanners that are equipped with affordable sensors suitable for UAS laser scanning. Most of these sensors are designed for industrial applications and robotics (manufactured by, for example, SICK, Ibeo and Hokuyo). The main advantages of these sensors are their low price, small size and durability, all of which are advantages for UAS-based laser scanning. However, the performance of these types of sensors is limited. The speed of data collection, ranging accuracy, limited maximum range and often lack of implemented or available signal processing techniques means that they are not always suitable for commercial heavy-user operations, but they suffice for many other (research) applications. Other UAS-compatible systems that have recently emerged are multi-layer laser sensors originating from the automotive industry, such as Velodyne LiDAR Puck LITE and Quanergy M8-1 LiDAR. These systems offer high data rates and some of the other desirable features at a reasonable price. Multi-layer data capture improves the along-track sampling while the 360-degree field of view enables more comprehensive data collection of complex scenes such as the urban environment.

UAS-specific sensors are designed for airborne operations and their specifications make them more suitable for professional use. Their design effort, however, has a clear effect on pricing and the systems from this product class have price tags starting at tens of thousands of euros. Placing such a sensor on a UAS significantly increases the overall system costs. This has a negative impact on exploiting their capabilities for the mapping industry. Examples of professional sensors are Riegl VQ-480-U or VUX-1 variants, which are full-performance sensors. They allow for operations at high altitude (500­-1,500 metres). At these altitudes, however, a manned aircraft is often a more convenient approach, also because of the strict regulations for UASs.

Example of a low-altitude UAS

The previously mentioned Hokuyo and Velodyne LiDAR Puck LITE are examples of sensors that are suitable for low-altitude missions, which is the typical prerequisite for UAS operations due to safety regulations. These sensors can operate at flight altitudes of up to 100 metres, but in practice typical operation altitudes are 40-70 metres. The flight capability of the small UAS shown in Figure 1 is about 20 minutes including a safety margin, but the flight time also depends on the wind conditions. This results in a flight path length of between 1.5 and 2 kilometres. With a field of view of 60 degrees and a flight altitude of 70 metres this makes it possible to capture a strip of 80 metres wide. Figure 2 shows an example of point cloud data collected with the Hokuyo UXM-30LXH-EWA for mapping river bed topography. The inset shows an aerial image of the smaller point bar (which was also acquired with a UAS).

Applications in the urban environment are diverse and may vary from general area mapping for building planning purposes to fine-scale detection of power line components for maintenance purposes. The urban space is often busy. There is little margin for error correction and malfunctions pose a high risk of damage to people and property, meaning that it can be challenging to apply UASs in the urban environment. Nevertheless, it is regarded as an interesting new technology offering a range of new mapping and change-detection applications. The data in Figure 3 was collected using a rotary-wing UAS equipped with a Velodyne LiDAR Puck. The sensor package used here also included a NovAtel IGM-S1 GNSS-IMU device for observing and recording the sensor flight path and orientation. The platform executes the flight plan autonomously while the progress of operation is viewed on a display connected to the system via WLAN. The accurate (corrected) flight path is computed during post-processing using GNSS base station data or data from a virtual network, after which the point cloud data is computed. Point cloud accuracy directly depends on the flight-path solution accuracy but also on the relevant sensor performance. At best, one can expect to obtain a point cloud accuracy of 5 to 10cm. The point densities in the data can be between dozens and thousands of points per square metre, which is a much larger number compared to that of a traditional ALS dataset (1-20 points per square metre). The wide field of view of the sensor allows for simultaneous capturing of the terrain, street infrastructure, building walls and roof structures.

Looking to the future, flash Lidar technology (e.g. ASC TigerCub) is a promising development for UAS laser scanning. Flash Lidar allows for fast data acquisition rates with simultaneous areal coverage and overlap due to framed sensing. This enables the multi-look principle for data acquisition, which improves object detection and recognition. However, flash Lidar sensors are very expensive at the moment and, due to their military origin, only limited knowledge is available in the civil domain. Another interesting trend is the development of solid state photon counting sensors in various sizes: larger sensors suitable for use with manned aircraft or large UASs, or extremely small and lightweight sensors based on single photon avalanche diodes (SPAD). In research laboratories, SPAD sensors can reportedly already achieve the same ranging performance as the current low-cost industrial laser scanners. When fully developed and operational, these sensors will definitely change the UAS-based laser scanning field in the years to come.

Figure 3, Architectonic urban scene mapped with a Velodyne LiDAR Puck laser scanner mounted on a small rotorcraft. The 360-degree field of view allows for simultaneous capturing of roofs and walls.

Dr Anttoni Jaakkola is a research manager at the Finnish Geospatial Research Institute FGI and the principal investigator for UAS laser scanning systems and applications for remote sensing of urban areas, forestry and topographic modelling.

Prof Juha Hyyppä is the director of the Centre of Excellence in Laser Scanning Research (Academy of Finland) and head of the Department of Remote Sensing and Photogrammetry at the Finnish Geospatial Research Institute FGI.