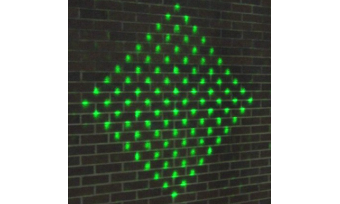 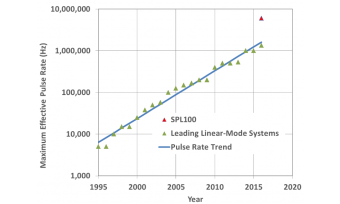 Current airborne Lidar systems, such as the Leica ALS series, capture one million points per second. Increasing the pulse repetition rate is the best way to achieve dense point clouds at lower costs, as the flying speed can be increased. However, the pulse frequency is constrained by parameters such as energy consumption and eye safety. Single photon Lidar enables a much higher pulse rate to be achieved, since much less energy is needed per pulse.

Lidar systems are typically constructed from a number of components: a range-finding system, scanning optics to direct the laser pulses, and a position and orientation system to record the origination point of the laser pulse. When employed for airborne Lidar, such a system is sometimes also referred to as ‘linear-mode Lidar’.

Linear-mode Lidar systems use relatively high energy in each emitted laser pulse. Each pulse travels from the aircraft to the ground, from where it is reflected back to the scanner. By using more energy per pulse, a stronger reflection can be recorded because more photons are reflected by the terrain below the aircraft. The output from linear-mode systems is impressive and these systems provide data with high spatial and radiometric precision. However, the technology does impose some limitations on the maximum effective pulse rates that can be achieved.

The pulse repetition rate is the most important parameter to define the acceptable flying height and flying speed during data acquisition. A higher pulse repetition rate allows for faster flying while maintaining a similar point density. As the pulse rate of linear-mode Lidar systems increases, so too does the electrical power consumption. In addition, there will be greater heat generation by the lasers used. The ability to generate increasingly higher average optical output, required for ever-higher pulse rates, is an engineering challenge. Besides accuracy and pulse repetition rate, the sensor design should consider total electrical power consumption, system cooling, size, weight and eye safety. This results in limitations on maximum average optical output, thus also limiting the maximum effective pulse rates.

In order to take a next step in airborne Lidar system development, the required energy per pulse must be reduced. This can be achieved by changing the nature and technology of the range-finding system. Next-generation Lidar technologies, including single photon Lidar (SPL), rely on new range-finding systems to achieve lower energy consumption and higher pulse rates.

SPL was originally developed for Earth-to-satellite ranging and has proven to generate accurate range measurements using a minimal amount of laser energy in each pulse. Compared to currently available linear-mode Lidar systems, SPL allows range measurements to be made from as little as a single photon reflected from the terrain below the aircraft. This level of sensitivity allows a given amount of laser output to be allocated to higher pulse rates with lower energy in each pulse.

The SPL system contains a laser splitter, which splits each laser pulse into an array of ten by ten small laser beams (Figure 1). For these 100 beamlets, the travel time of the photons to the ground and back is measured individually. The amount of energy in each beamlet is much smaller compared to traditional Lidar but, thanks to the higher sensitivity, a single returning photon is sufficient to measure a range. The SPL system can generate 60,000 pulses per second. Since each pulse is split into 100 beamlets, this results in an effective pulse rate of 6.0MHz – significantly higher than can be achieved with linear-mode Lidar.

Linear-mode Lidar systems allow for the registration of peaks from various target reflections within the full return waveform, which can be processed to retrieve multiple returns. As SPL systems do not capture a continuous wave but count the individual photons instead, such a full waveform is not available. However, it is still possible to retrieve multiple returns thanks to the very short channel recovery times of 1.6 nanoseconds. This means that the photon counter is reset every 1.6 nanoseconds to count if any new photons return from the beamlet. These are then regarded as a new return. The result is a true multi-return Lidar system with short inter-return separations of 24 cm. As a result, SPLs can acquire high-density point clouds of 12 to 30 points per square metre with many returns underneath canopies. The point density varies inversely with the flying height. If the flying height is doubled, the covered swath will double, but the point density will be cut in half.  An SPL instrument flying at 200 knots at 4000 m above ground will produce a point density of roughly 20 points per square meter. Figure 2 shows an example of a resulting point cloud.

Linear-mode Lidar remains the industry standard, yet SPL is gaining acceptance for large mapping projects. For instance, the U.S. Geological Service 3D Elevation Program, which aims to systematically collect enhanced elevation data in the form of high-quality Lidar data, has employed SPL. The system has proven to meet the accuracy standard for USGS QL1 data, which corresponds to a height precision better than 10 cm for non-vegetated areas. Other applications, such as corridor mapping, resource classifications and bathymetry, require more data from each data point, such as robust intensity values or full waveforms. These cannot be achieved with SPL, making linear-mode Lidar more appropriate.

In general, the lower the cost per data point is, the greater the number of applications that will emerge to use any type of data. Therefore, SPL is particularly well suited to large-area applications where huge numbers of data points are to be acquired.

The performance of SPL is expected to increase over time in terms of accuracy and radiometric capabilities. This will result in a shift over time in application areas for which SPL is suitable. It is also expected that the effective pulse rate of SPL systems will continue to improve, just as effective the pulse rate for linear-mode systems has steadily improved over the past two decades. This can be seen in Figure 3. With current performance levels at six million points per second, SPL could potentially be capturing one billion points per second in less than a decade from now.

Bringing down the cost per point through higher effective pulse rates is the best way to address large-area, high-point-density projects in the future. As more applications appropriate for SPL emerge, we will see positive changes throughout industries, such as increased efficiency in resource management, more effective infrastructure planning and better preparation for natural disasters.

Ron Roth is product manager for airborne topographic Lidar at Leica Geosystems. Roth holds a BSc in mechanical engineering from Worcester Polytechnic Institute and an MBA from Babson College. He was also awarded a United States patent for a remote counter-balancing mechanism.