GIM International Measures the Mood of the Industry 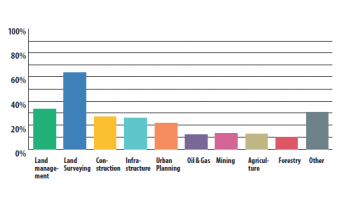 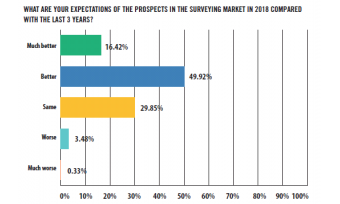 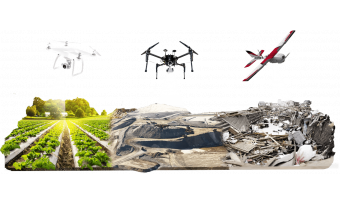 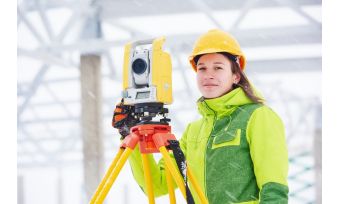 In 2008, the seemingly endless growth of the geomatics industry was rudely interrupted by the global economic crisis and its enduring after-effects. But now, ten years later, the readers’ survey conducted by 'GIM International' reveals widespread optimism about the outlook of the mapping and surveying business. This renewed positivity represents many new opportunities for manufacturers of geospatial solutions and service providers. This article zooms in on these chances and provides insights into the needs, wants and demands of the widening customer base related to geomatics and all its verticals. Read on and let us brighten up your day!

Consultants, government officials, managers, researchers and technicians all make up the GIM International readership, and they are predominantly at decision-making level which makes this readers’ survey even more relevant. The top five sectors they are involved in are land surveying, land management, building & construction, infrastructure and urban planning. Notably, the number of geospatial professionals active in agriculture and mining is growing significantly (see Figure 1 for an overview), which is a clear sign of the upward trend in the integration of geospatial technology in many verticals. Developments such as the unfolding precision-farming revolution offer plenty of new opportunities. The robotic technology that is set to transform agriculture is estimated to become a US $45 billion industry1 within the next two decades. The swelling world population not only places greater demands on the agro-food industry, but it also poses a challenge for the building & construction and the infrastructure sectors, not to mention urban planning professionals.

Prospects in the surveying market

But let’s return to the optimism. In view of the fact that the financial crisis is behind us in many parts of the world, coupled with changing societal demands in the decades ahead, this optimism may seem perfectly logical. Indeed, the participants of the GIM International survey are in a very positive state of mind about the prospects in the surveying market in 2018 (see Figure 2). In fact, the number of professionals with a negative view of the current state of the market can almost be counted on the fingers of one hand.

So the mood is clearly upbeat, but where exactly are all those growth opportunities? The open-ended question in the survey generated lots of different answers on this topic, but a shortlist of the most frequently mentioned words paints an interesting picture of the most promising markets. Drones (or UAVs) are way out in front at the top of the list, and the rest of the top five is made up of construction/infrastructure, BIM, surveying (thank goodness!) and laser scanning (Lidar). Other high-potential industries include energy and mining. Another noteworthy outcome is the combination of Lidar and UAVs, which together are seen as a suitable tool for deployment in a varied range of applications such as forestry, building & construction, infrastructure and more.

We could spend hours discussing the limitless possibilities for mapping and surveying applications, and it is great news that there seem to be so many chances, but who is actually willing to spend money on such solutions? In other words, where should manufacturers be focusing their attention? Which market segments should they concentrate on? What is the state of the geospatial investment readiness (GIR)? Almost 70% of the respondents indicate that their organisation plans to invest in new systems in 2018. This very high GIR will surely make every company involved in the geo industry sit up and take notice. But which types of systems are the respondents about to purchase, exactly? Let's have a look at the chart.

The top three comprises UASs (or drones), GNSS receivers and GIS software, with more than 40% of the respondents planning to invest in at least one of those three systems. Between 20% and 30% intend to acquire photogrammetry software, point cloud processing software, total stations, terrestrial laser scanners, mobile mapping systems and/or UAS-Lidar. The latter is also covered below as one of the technologies regarded as having the most impact on the profession today, and the likely trends over the next five years.

In spite of the initially enthusiastic predictions, technological advancements such as augmented reality (AR) and virtual reality (VR) have still not really taken off, and the same goes for blockchain. So which developments are currently perceived as the biggest influencers? The top three by a clear margin are robotics/autonomous vehicles (including drones), IT and apps/mobile devices, followed by artificial intelligence (AI) and the Internet of Things (IoT). While is perhaps to be expected that drones are named as the technology with the most impact right now, they are mentioned surprisingly frequently in conjunction with Lidar (Figure 3). It seems safe to say that UAS-Lidar is about to deliver on its promise.

Another finding that can be distilled from the participants’ input is the changing nature of the surveying role. Their work is shifting away from ‘boots on the ground’ (Figure 4), as increasing automation and the growing influence of robotics require surveyors to increasingly develop their ‘soft skills’ to survive; they are becoming mediators, advisors and consultants rather than ‘just’ operators of technology. To cite one of the respondents: “With the enabling technology from robotics and AI, strong standardisation, certification and quality assurance which leverage geomatics as a technology rather than an independent profession, geomatics might become an integral part of services and solutions while it is losing its base as an independent discipline.” There has been much debate on the future of the mapping and surveying professional, and the definition of a surveyor’s tasks is changing, but given the seemingly insatiable need to capture our reality, the future of the geomatics professional does not appear to be under threat. It may be a different reality than a decade ago, but it is one that will be catapulted by all the technological innovations that are happening.

After glimpsing the future, now let’s move back to the present. What can manufacturers and developers of geospatial solutions expect this year? After reviewing the comments, it is easy to draw the first conclusion: while most companies have been very reluctant to invest in new hardware and software over recent years, they now realise they cannot wait much longer. Many respondents also indicate the need to invest in more technologically advanced instruments to improve the accuracy, effectiveness and efficiency they can deliver. Improving efficiency is a top priority for many companies, and renewing and modernising their equipment is high on the list too.

Reality capture has made its entrance in many industries, ranging from agriculture to construction and from mining to transport – just think of geomatics’ impressive contribution to autonomous driving. As a result, the horizon is broadening for the equipment manufacturers and software suppliers, and this is underpinned by the outcomes of the readers’ survey. Planned investments, each with their own purpose, are coming from many directions. Again, it is striking how many respondents express their intention to purchase a UAS, and a relatively large number also show an interest in combining UAS and Lidar. Also worth mentioning is the interest in purchasing a laser scanner, while total stations and mobile mapping systems are high on the list too. In terms of software, image processing software and GIS solutions are the key targets of upcoming investment.

It should be noted that a considerable share of the survey participants state that money is a serious issue in the decision whether to purchase new equipment or not. Especially universities and various organisations (both governmental and non-governmental) indicate that they rely on subsidies or gifts. Respondents from developing countries in particular express the need for low-cost solutions, e.g. for land administration and cadastral mapping purposes.

Apart from helping us to get a good picture of ‘what’s hot and what’s not’ in the geospatial industry, the readers’ survey also gave us at GIM International an opportunity to find out which topics we should cover more, what kind of content our readers would like to see and what will help them to stay even more up to date on the latest industry trends and developments. GIS, 3D modelling and UAS/drones were the winners of this poll, but many other subjects were named as well, including geospatial intelligence, mobile mapping, land administration, BIM, smart cities and point clouds. There is a clear link between the systems people indicate they will invest in, the developments they predict in the geospatial field in the years ahead, and also the topics they want to see covered by GIM International.

Our editorial team have been slightly surprised by the number of people who indicated a desire for more content on bathymetry and seabed surveying. Therefore, we’d like to take this opportunity to mention our sister publication Hydro International which covers all major topics in the hydrographic business such as marine surveys, electronic charting, sensor technology, oceanography and much more.

While keeping you up to date with the latest advancements in the geomatics business is one of our priorities, education is another important function of GIM International (figure 5). Our editorial board acknowledges that learning is a vital pillar and a lifelong process and does not finish when you graduate as a surveyor or engineer. Several comments were made regarding the need to make geomatics more attractive and to encourage high school students to become professional surveyors. As GIM International, we have addressed this issue in the past and will continue to do so in the future.

Geomatics includes many ingredients, which can sometimes make it hard for us to determine the right focus. The respondents’ feedback on this matter, however, is very motivating for everyone involved with the creation of content for our publication. “Keep the diversity” and “There is always a good mix in the magazine; focusing too much on one or several topics may miss the wider picture” were just some of the remarks. These encouraging words are a fittingly optimistic conclusion to our analysis of the readers’ survey.