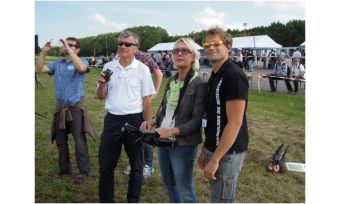 Activities carried out by Commission 4 are highly interdisciplinary, and many of these activities are co-ordinated in close co-operation with IAG sister organisations, US Institute of Navigation (ION), International Society of Photogrammetry & Remote Sensing (ISPRS) and the International Federation of Surveyors (FIG). Recognising the central role of GNSS in providing high-accuracy positioning information today and into the future, Commission 4 has a focus on developing tools that enhance and assure the positioning performance of GNSS-based positioning solutions for a range of geodetic and other scientific applications as well as engineering and other societal ones. In addition, Commission 4 promotes the study of back-ups to GNSS and integrated positioning solutions based on conventional and unconventional sensors to assure positioning, navigation and timing (PNT) in GNSS-challenged environments. In the past few years, the scope of Commission 4 has broadened to include geodetic remote sensing, using synthetic aperture radar (SAR), Lidar and satellite altimetry systems for a variety of applications.

One of the primary examples of inter-organisational collaboration is co-sponsorship of professional workshops and seminars, such as the International School on Mobile Mapping. Held for the first time in 2012, the 2nd International School on Mobile Mapping will take place at the National Cheng-Kung University, in Tainan, Taiwan, 9-13 June 2014 [http://conf.ncku.edu.tw/mmt2014/]. This is an interdisciplinary event co-sponsored by IAG Commission 4, FIG, ISPRS and ION. Another example of a highly interdisciplinary and inter-organisational event is the Mobile Mapping Symposium series, with the most recent 8th Symposium held in Taiwan in 2013 and the next event to be held in Sydney, Australia, in 2015.

A major upcoming event is the joint Symposium on Sustaining Land Imaging: UAS to Satellites, which is being co-organised by the ISPRS Technical Commission I, Sensors and Platforms for Remote Sensing, and IAG Commission 4. This event is part of the William T. Pecora Memorial Remote Sensing Symposium, organised by the American Society for Photogrammetry & Remote Sensing, and will be held in Denver, Colorado, USA, from 17-20 November 2014 [http://www.asprs.org/ASPRS-Conferences/blog.html].

Establishing an Operational SBAS Down Under