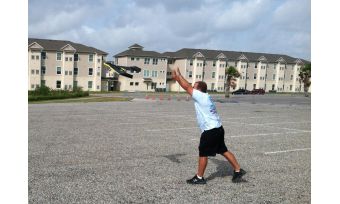 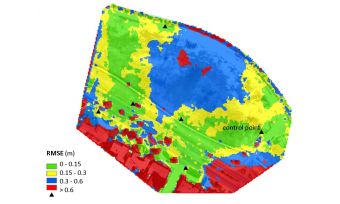 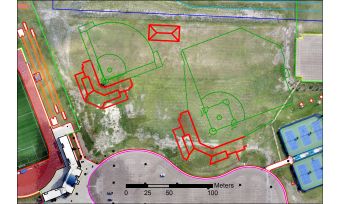 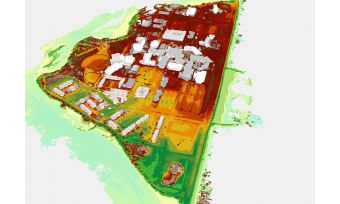 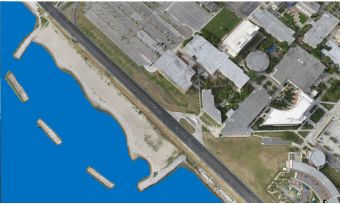 Texas A&M University-Corpus Christi, home to the largest geomatics undergraduate programme in Texas, USA, is currently undergoing a major university expansion. Both the main Island campus and the Momentum campus, which is a smaller developing campus, are undergoing extensive construction projects. The university’s Conrad Blucher Institute for Surveying and Science (CBI) was tasked with devising a comprehensive way to capture the spatial information needs related to the expansion. This effort is ongoing and is being conducted by students, providing them with a unique survey experience.

The initial task was to perform a complete ground survey of all existing infrastructure at the Momentum Campus including roads, buildings, pavements and above-ground utilities. This was completed in about a semester by a group of three undergraduate students (led by author Thomas Davis) utilising a survey-grade RTK GPS and a total station. As the needs of the project grew larger, requests started coming in for aerial photos to show the new buildings evolving on both campuses. This was going to be a very costly operation because the university was requesting several aerial flights per year to monitor development. CBI came up with a more cost-effective plan by suggesting the idea of acquiring a small-scale unmanned aerial system (UAS) to meet the university’s aerial mapping needs.

CBI acquired the Sensefly eBee, which is an ultra-lightweight (~0.7kg) autonomous platform specifically designed for geospatial mapping applications. This system is accompanied by its own proprietary flight control software (eMotion 2) and image processing software (Postflight Terra 3D). The current sensor payload consists of a three-band RGB camera and a three-band NIR-G-B camera, both with 16.1 megapixel resolutions. Post-processing of the imagery enables the generation of three geospatial end products: a rectified orthomosaic, a digital surface model (DSM) and 3D point cloud data.

The university had to go through a lengthy and detailed authorisation process with the United States Federal Aviation Administration (FAA) to receive a Certificate of Authorization (COA) to legally operate the UAS. In June of 2014, Texas A&M-Corpus Christi received its first COA to legally operate the Sensefly eBee over its two campuses. Because of the university’s proximity to a US Naval Air Station, current UAS flight operations are restricted to Sunday mornings when air tower operations temporarily close.

The first flight took place over the Momentum campus in early June 2014 (Figure 1). One flight at an altitude of 107 metres above ground was conducted to cover the 61-hectare campus with 60% lateral image overlap and 75% longitudinal overlap. The flying height resulted in approximately 3cm spatial resolution. The flight time was approximately 30 minutes and about 200 pictures were taken. Another series of flights was conducted a week later to survey the main campus. Two flights were flown over the Island campus to cover the ~111 hectares that encompass the main campus, utilising the same flight characteristics as the initial flight. The total flight time encompassed about 70 minutes with a total of about 350 pictures taken. All imagery was acquired with the RGB camera.

Prior to utilising the spatial data for any type of engineering, construction or planning work, the horizontal and vertical accuracies had to be examined. A small test area was extracted from the flights to test the technical aspects of the UAS. The post-processing workflow consists of an initial phase of image matching and sparse point cloud generation followed by a secondary phase of point cloud densification. The densification data is then integrated to create a DSM and orthomosaic. The estimation of 3D structure from the 2D imagery in the post-processing software is performed using Structure from Motion (SfM). The software is capable of processing the raw imagery by two methods: direct georeferencing and incorporation of ground control points (GCPs).

The process of direct georeferencing is done by default in the post-processing software if no GCPs are identified. The horizontal and vertical locations are derived from the on-board GPS receiver (not differentially corrected), which is accurate to about 3 to 6 metres. The same dataset was processed again by incorporating a total of six GCPs spread throughout the entirety of the sample data set. The GCPS were collected on the ground by using a survey-grade differential GPS that was tied to a Virtual Reference Network (VRS), which is accurate to about 2.5cm horizontally and 5.0cm vertically.

The horizontal accuracy assessment was performed by comparing the distance on the image to the distance on the ground for independent control points measured in situ using a survey-grade GPS receiver. With the direct georeferencing method, the independent checkpoints were an average of about 6 metres off; however, it is important to mention that the relative baseline distance between points exhibited sub-metre accuracy. In comparison, the integration of high-accuracy ground control into the processing workflow resulted in an average planimetric offset between the imaged derived checkpoint and control points of about 0.08 metres. This is a significant increase in the horizontal accuracy of the UAS-derived products, and demonstrates that the UAS is capable of producing survey-grade planimetric mapping results. Additionally, at up to 29 km/h, wind conditions were relatively high on the morning of the flights. The results further demonstrate the potential of the system to acquire accurate data during less than optimal conditions.

The vertical accuracy of the topographic data derived from the UAS was compared to an airborne Lidar survey acquired over the same area in 2011. Differences in elevation were computed by deriving a DSM from each method at 0.5m resolution and performing a raster difference (Lidar DSM – UAS DSM). Figure 2 shows the spatial distribution of elevation RMSE computed from the difference raster using a 3 x 3 moving window. The raster shows an apparent pattern of RMSE increasing as the distance from the control points increases. Since there is an approximate three-year separation between the surveys, cars parked in different places and other landscape changes can explain some of the high outliers observed in Figure 3.

Overall, the average difference in elevation between the two methods over the study area was approximately 0.13 metres. The positive elevation bias indicates that the elevations derived from the Lidar were slightly higher relative to the UAS. Observed elevation differences can stem from a variety of factors including differences in the 3D measurement methodology (e.g. Lidar DSM derived from first-return points compared with UAS DSM derived from imagery via SfM), point sampling density, natural modifications of the land surface during the span of the survey, vegetation changes, and others. Finally, it is important to mention that the vertical comparison presented here is only relative between the two methods for the given survey conditions. No assumptions on absolute accuracy should be made because the results were not based on an independent set of higher-order vertical control (current study underway).

After the accuracies were verified, the products derived from the unmanned flights were incorporated into the projects assigned to the Conrad Blucher Institute. One immediate impact of the integration of the unmanned technology was the ability for the university to plan infrastructure projects using the orthomosaic as a high-accuracy base layer within a unified coordinate system. Prior to the ground surveys and orthorectified aerial imagery, the planners had to use arbitrary coordinate systems with rubber-sheeted imagery that was several years old. This would often cause problems because engineers and architects did not know how much area they had to plan with or did not have a real-world view of the topography surrounding their work projects. Figure 3 shows how the existing survey data and the UAS imagery can be utilised to help planners fit their designs for a proposed baseball field on the Momentum campus. The new system allows for planning with continually updated survey data and imagery, and helps speed up the process from design to construction of infrastructure projects. The imagery is also being used by campus police to serve their GIS information needs.

The 3D point cloud data derived from the UAS has also proven to be a very useful tool for the university (Figure 4). It allows for planners to estimate the heights of features on the campus as well as derive 3D building models to provide new visualisation perspectives. Furthermore, the university has an engineered beach located along Corpus Christi Bay, and the topographic data derived from the UAS is being applied to monitor beach erosion and guide management efforts (Figure 5).

Today, a new team of students are leading the charge on the campus survey project. All UAS-acquired data is processed and analysed by the student survey team and fed directly into the campus decision-making process. The end result is a dynamic learning environment that exposes Texas A&M-Corpus Christi geomatics students to the frontiers of UAS surveying and empowers them with the opportunity to have their efforts directly help guide and shape the future growth of the university.