A Product Survey on Systems and Features 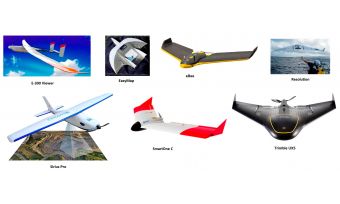 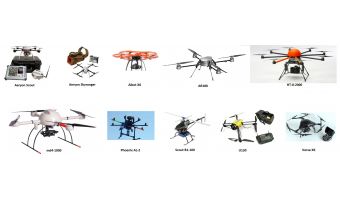 In recent years, unmanned aerial systems (UAS) have attracted tremendous attention from surveyors and other geodata collectors all around the world. Nowadays, UAS equipped with GNSS, IMU and RGB, NIR or TIR cameras and possibly Lidar have evolved into high-potential surveying devices which have now definitely passed the stage of ‘toys for boys’. This article focuses on UAS for mapping and 3D modelling and provides a detailed survey in tabular format on the features of the prevailing systems, both fixed wings and multicopters, available on the market today

An unmanned aerial system (UAS) is an aircraft which flies without a human pilot on board. It is steered wirelessly by remote control or flies on its own following a pre-specified air path guided by GNSS and an inertial navigation unit (IMU). In this case, it is continuously monitored by a human operator who can intervene if necessary, such as when the UAS should encounter heavy turbulence or face unforeseen obstacles. UAS come in wide diversity of shapes, sizes and grades; they may be as large as aeroplanes or small enough to fit into the palm of your hand. They may serve a wide variety of uses ranging from reconnaissance and bombardments of enemy targets to more peaceful practices such as parcel delivery services and inspection of flooded areas. Originally designed for military use, today’s UAS have proven their aptness for mapping hazard-prone areas, monitoring flooded areas, cadastral mapping, inspecting pavements, and many more non-violent geo-related tasks.

Notably, no geodata-collection technology has become so popular among so many surveyors and photogrammetrists in such a short time as UAS. What these professionals value most is the ease with which sites can be revisited. The same area can be flown on a quarterly, monthly or even weekly basis, which is ideal for rapid and frequent monitoring of dikes, dunes, landslides, construction sites, open-pit mines, crops, floods and many other sites. Some field surveyors have to operate in quarries and mines, walking over piles of hazardous waste or placing their rods while surrounded by roaring heavy machinery. A UAS relieves them from visiting such sites in person, thus avoiding potential accidents and health risks. Purchasing costs are low and the piloting and operation of a UAS can be learned within a couple of hours to a few days. The accuracy of the orthomosaics, digital elevation models (DEMs), maps and 3D city and landscape models obtained from a UAS is similar to conventional land surveying and photogrammetry.

The rapid rise and growing popularity of the UAS ensued from a once-in-a-decade convergence of developments. Micro-electronics, auto-piloting, high-charge batteries, super materials that are strong yet lightweight, wireless communication, compact digital cameras, image-processing software, miniaturisation of GNSS and INS, and so on – all of these novelties created synergy. However, the key to the success of UAS lay not only in the hardware and electronics but also in the ability of today’s software to automatically derive orthoimages and DEMs from overlapping digital images and airborne Lidar point clouds. The scientific fields of computer vision and artificial intelligence have definitely contributed to the development of the backbone of UAS through fundamental research. Indeed, today’s photogrammetric software supports high automation of the entire chain, from flight planning, self-calibration of consumer-grade cameras and aero-triangulation through automatic block adjustment up to the creation of DEMs and orthomosaics as well as their confluence: 3D city models and 3D virtual landscapes in which a surveyor can place a cursor, as if it were a rod, over a terrain point from the comfort of an office. Field survey is only necessary when high-precision georeferencing is required, and this is done by measuring through differential GNSS the coordinates at sub-centimetre level of around half a dozen ground control points (GCPs) evenly distributed along the borders of the area. As a result, the full survey, from flight planning up to the final georeferenced products, can be conducted in just one or two days.

UAS platforms can be split up into two broad categories: fixed wings and multicopters. Most of these platforms are lightweight and thus easily portable on a human back. A fixed wing can use the uplift capability of its wings, which reduces energy consumption and enables high-speed flying. Hence, a fixed wing can stay in the air longer than a copter, can resist higher wind forces and capture larger areas per flight. A fixed wing is thus better suited for mapping large areas than a copter of comparable size. On the other hand copters are more manoeuvrable and need, in contrast to fixed wings, only small launch and landing spaces as they can take off and land vertically (VTOL). Therefore, a copter is ideal for mapping buildings and small areas.

The backbone of this article is a survey on the features of the diverse fixed-wing and multicopter UAS available on the market today. Tables 1 and 2 (see below) list the main features of fixed-wing UAS and multicopters, respectively. Figure 1 depicts the fixed wings and Figure 2 the copters included in our product survey. The information has been provided by the vendors themselves by filling in a questionnaire prepared by the author through the product comparison website Geo-matching.com. The listing is not entirely complete. For example, the Falcon 8 from Ascending Technologies, mentioned above, is not present in the list. We hope that this article will encourage more vendors to upload the specifications of their UAS products onto Geo-matching.com. All lightweight UAS in the survey as tabulated are propelled by an electric motor, powered by a battery. The service life of the battery together with wind speed largely determines how long the UAS can stay airborne. All fixed wings listed are propelled by an electric engine. In the overview, shown in Table 2, only one copter, the Scout B1-100 – empty weight 45kg and able to carry a payload up to 30kg – is propelled by a combustion engine. For nearly all systems the main sensor on board is an HD RGB camera. The camera mounted on a UAS is usually consumer-grade or used by professional photographers and manufactured by Sony, Olympus, Panasonic, Canon or other major producers. All systems are equipped with GNSS and IMU for navigation purposes and for calculating position and orientation of the camera during exposure in the block adjustment procedure. Some extend these sensors with barometers and compasses. Although flight planning software is standard, photogrammetric and point cloud processing software is usually not a standard part of the purchase. This is also true for the ground computers; some provide a notebook or tablet equipped with control software but others do not, which enables clients to choose a suitable ground base station themselves. Installation of other sensors, such as near infrared, thermal infrared and hyperspectral cameras, is often optional. Photogrammetric and point cloud processing software recommended or delivered by the UAS vendors includes: Agisoft PhotoScan, Pix4D, Postflight Terra 3D EB and SmartPlanes Aerial Mapper. A lightweight UAS is rarely equipped with airborne Lidar as these devices are rather heavy and bulky compared to today’s digital cameras.

A UAS used for mapping, reconnaissance and inspection is usually lightweight. However, there is always one exception that proves the rule, and in this case the exception is the Camcopter S-100, a rotorcraft from the Austrian company Schiebel. With a weight of 110kg, wingspan of 3.40m, a top speed of 222km/h, a ceiling of 5,500m and payload capacity of 50kg, this UAS is a mastodon compared to the others in use for geodata collection. It went into serial production in 2005, and more than 150 systems are in operation worldwide today. Powered by a 55hp Diamond engine, the UAS can stay in the air for 6 hours and serve a wide diversity of applications as the payload may consist of a variety of sensors including optical, near-infrared and thermal infrared cameras, synthetic aperture radar (SAR), ground-penetrating and maritime radar, and Lidar. No standard payload is offered; payload is integrated according to client needs. For example, the UAS has been equipped with a Riegl hydrographic Lidar designed to survey beds of water bodies in support of mapping coastlines, lakesides and riverbanks. But the Camcopter S-100 has also been used for power line surveillance and security monitoring during major events such as the 2010 G20 Seoul Summit. It is obvious that this system is one to two orders of magnitude more expensive than a lightweight UAS. With an empty weight of 45kg and a payload capacity of 30kg, the Scout B1-100, offered by the Swiss company Aeroscout GmbH, is another mastodon among the copters (see Table 1). In addition to a camera, this UAS is equipped with a Riegl airborne Lidar system.

Mathias Lemmens gained a PhD degree from Delft University of Technology, The Netherlands, where he presently lectures on geodata acquisition technologies and geodata quality on a part-time basis on the recently renewed geomatics MSc programme. He is the author of the book Geo-information: Technologies, Applications and the Environment published by Springer in 2011. He was editor-in-chief of GIM International for ten years and now contributes as senior editor.