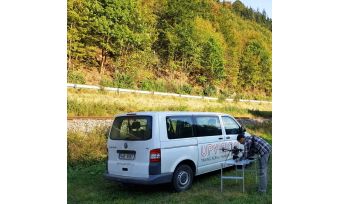 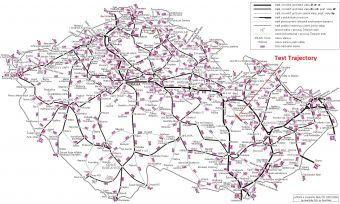 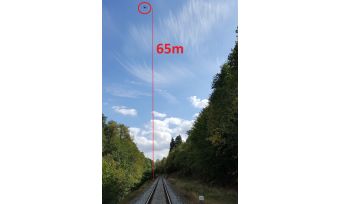 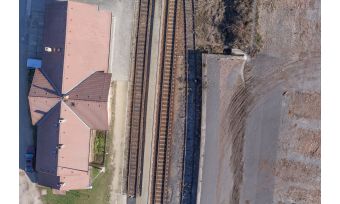 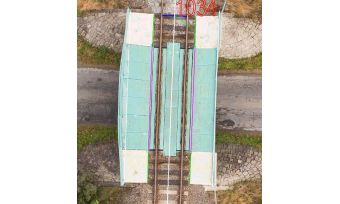 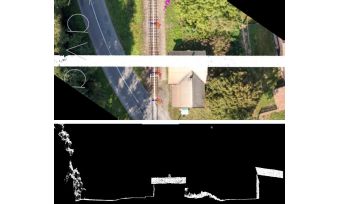 Today’s photogrammetric software is able to create dense and precise digital surface models (DSMs), digital elevation models (DEMs) and orthoimages. But is the accuracy sufficient for highly demanding railway applications? A pilot project carried out in the Czech Republic demonstrates that unmanned aerial system (UAS) photogrammetry has great potential for collecting geodata meeting railway companies’ high standards of precision. Parallel computing based on 16 personal computers (PCs) was used to process the 11,000-plus images in a reasonable time span.

Safeguarding the continuous operation of rail traffic entails maintenance of the rails, sleepers and gravel beds, design and construction of extension works and monitoring of the condition of railway bridges, among many other activities. All these tasks require the efficient and regular measuring and mapping of railway trajectories and their surroundings. Ground surveys can interfere with the train timetables, causing delays and dissatisfied travellers, plus they are expensive. An alternative geodata acquisition technology that does not interfere with railway operations is aerial photogrammetry. Manned airborne surveys, especially when they have to be carried out on a regular basis, are costly. A feasible alternative might be the use of a UAS. In cooperation with the Institute of Geodesy and Mine Surveying at the Technical University of Ostrava, Upvision conducted a feasibility test (Figure 1).

The test focused on finding out whether UAS photogrammetry is able to attain the high standards of precision required for mapping railways and surrounding objects as set by the Czech Railway Infrastructure Administration (RIA). The mapping products should obey RIA’s class-two and class-three accuracy standards, i.e. positioning precision of 4cm and 6cm respectively. A non-electrified single-track railway in Drahany Highlands was chosen as the test trajectory (Figure 2). With a length of 13.7 kilometres the track covers a variety of landscapes. It starts with open, flat agricultural fields lying at an altitude of 310 metres above sea level with many bends. After about four kilometres the track enters a narrow valley with steep slopes covered by tall spruce stands. Moving deeper into the valley, the track climbs up to an altitude of 505 metres. Over the final two kilometres the track descends and passes through pasture landscapes.

Accurate ground control points (GCPs) form the foundation for obtaining the high standards of precision required. They must be well distributed over the entire track in sufficient numbers. Therefore, a total of 173 GCPs were established along the track and measured using total stations. The angles and distances measured with the total stations were transferred into 3D coordinates in the national Czech coordinate system (JTSK) system used by the railway company. The GCPs were marked in the field with fluorescent-green circles of 3 to 4cm in diameter, which is 3.5 times the size of the required GSD (Figure 5). The marking was done by one field worker over two days. To quantify the quality of the UAS photogrammetric end products, the railway authority RIA provided a dataset of coordinates of railway points as well as a list of coordinates of points of objects alongside the railway line. These points had been obtained through ground surveys using total stations and were used to determine the precision in terms of root mean square error (RMSE). Furthermore, 3D drawings of the railway tracks were provided in Bentley Systems’ DGN format and accessed with MicroStation V8i. They were used to compute the accuracy of the track axis determined from the UAS imagery (Figure 6).

The images were processed in multiple steps resulting in the following end products: DSM, DEM and seamless orthoimage. Various software tools were used in the subsequent stages. Agisoft Photoscan Professional was employed for creating tie points, identification of GCPs and checkpoints, adjustment of the interior and exterior orientation parameters and the creation of the DSM. Trimble INPHO module DTMaster was used for DSM and DEM editing, and OrthoMaster and OrthoVista were used for orthorectification and seamless orthoimage creation. Figure 7 shows a point cloud profile taken from the DSM.

To guarantee the highest possible accuracy, all images were processed in one single block. Processing such a big block consisting of over 11,000 images on a single computer would take two to three months of non-stop computation time, which is of course impractical. Therefore, a computer network of 16 similar PCs (Intel Core i3 – 6100 CPU, 3.7GHz, 8GB RAM) was established. The computations using Agisoft were processed in a distributed way. The computation of the DSM, DEM and orthoimage required 1,385 machine hours in total.

The planar coordinates of 1,375 checkpoints were measured in the orthoimage with a GSD of 1cm and the corresponding heights of the points were derived from the DSM. The DSM was superimposed with the orthoimage to improve identification of the points. The distance between the orthoimage points and corresponding checkpoints was less than 20mm for 80% of the points, 89.4% of the points deviated less than 30mm and 96.5% less than 40mm. Hence, with a GSD of 1cm, a precision of class two could be attained and the precision of the height of flat terrain even surpasses class-two requirements. A GSD of 1cm is of course extremely high. To test whether lower GSDs would still provide results which meet the railway company’s standards, the images were resampled at a GSD of 2cm. Those tests showed that objects such as crossings, sleepers, platforms and buildings can be mapped with a planar precision of 4cm and a height precision of 6cm, which corresponds to accuracy class three according to Czech standards. To further scrutinise the feasibility of UAS photogrammetry for railway applications, simulations were performed in which the numbers and configurations of GCPs and checkpoints were varied. The outcomes will help to develop guidelines for using UAS photogrammetry for railway mapping.

Now that this pilot project has shown the feasibility of UAS photogrammetry for railway mapping applications, guidelines for measuring coordinates of points can be developed according to the accuracy classes required. In addition to the creation of DSMs, DEMs and orthoimagery, products derived from overlapping UAS images allow volume determination of pits or dumped material along the railway line. The resulting end products can also be used for simulating train rides, detecting concealed spaces and optimisation of the placement of railway traffic signs such as speed limits. UAS photogrammetry can furthermore be used for regular inspection of railways and their surroundings in order to, for example, identify displacements of rocks and potentially unstable rock/soil formations, to check slope stability and to detect changes in the terrain.