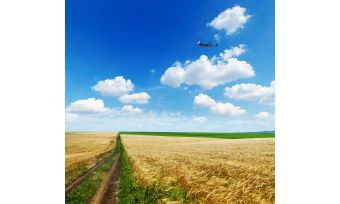 While unmanned aerial systems offer huge possibilities in modern farming, most of them lie in the future. These airborne vehicles currently mainly deliver images that are subsequently combined with other input in the farm-specific management system. In the future they will be able to contribute to land management and individual crop-product delivery based on real-time analysis. Another very promising segment for UAS-supported precision agriculture is water management.

Precision agriculture is a relatively young concept, dating from around the turn of this century. The first products were focused on add-on guiding systems for tractors. These give a good return on investment, generating savings in fuel and time by avoiding overlaps and gaps when farming a field. Although the financial benefits of these and subsequent products are very convincing, precision agriculture is still the domain of the large, high-yield farmers in 2016. However, the definition of ‘large’ differs around the world: from 500 hectares in France, to 5,000 in the USA and 50,000 in Ukraine. To put this into perspective, according to the Food and Agriculture Organisation of the United Nations (FAO) in 2014, there are 570 million farms worldwide and only 1% of them are larger than 50 hectares. The value of the crop is also a factor. For example, tulips in The Netherlands, rice paddy fields in South Asia or vineyards in California are more likely to justify the farmer’s investment – in terms of both money and the need too acquire a lot of new knowledge.

Whereas ‘ground-bound' precision farming is in the early adoption phase globally (although that is a phase of strong sales growth), only the most innovative farmers are enjoying the benefits of unmanned aerial systems (UASs). “It is still early days for UASs in precision farming,” confirms Jim Watt, regional director of Trimble’s Agricultural Division in Munich, Germany, who has provided advice on business development for precision agriculture almost everywhere in the world. “The people in this business are still working out what the value chain exactly is.” The return does not come cheap. All over the world, pilots have to be fully licensed and insured, and some countries make extra demands (for instance, the UK also stipulates a second observer).

Ultimately, the UAS produces an image. “The image itself has little value, but after software treatment it’s all about the total system – that can tell you differences in crop vigour, the location of pests or weeds or even errors in planting or application caused by malfunctioning equipment. Invariably, you have to involve a data specialist to help convert the image into information and a commercial agronomist who delivers specific services, from image interpretation to agronomic recommendation,” continues Watt.

What attracts the innovators to UASs? After all, they could also use a satellite or an aircraft to obtain the images. Watt states: “One main selling point is availability.” Service providers can often conduct flights on the same day. And the other benefit is resolution: “The cameras are very sophisticated and near to the ground so you are down to centimetre resolution. You can drill down to very high accuracy to see if, and exactly where, there is variation in the crop.” The resolution is so good that farmers and their agronomists are able to detect the level of plant emergence in their fields, which can be an early indicator of upcoming crop yields.

Farmers and agronomic service providers in the USA were the first to adopt this technology, followed by Australia. The business model of the farms there is less subsidy-driven than in Europe and farmers strive for ultimate efficiency. But over the last few years subsidy requirements have been a very strong driving force for UASs in Europe and that continent now has the largest user community. The need to be accountable to the EU and national governments, in exchange for agricultural or environmental subsidies, is driving European farmers to make intensive use of IT. Another major issue is food traceability, and a third reason is the loss of knowledge that was traditionally passed down through families. Farmers’ sons used to know which areas of their fields would produce a lower yield because their fathers told them so while looking over the fence. But now, due to the consolidation in the sector in Europe, farmers or contractors need agronomic and productivity data because they are strangers on their own land.

Pests, herbs, weeds, irrigation patterns: it is possible to build up a picture of what is happening in the soil by combining map layers and that is where a UAS comes in. Watt: “But all the data has to go into the farm’s management information system. Only then can you know what to do, i.e.. that specific area in that field needs that specific cultivation practice. With UASs you get better images and in a much shorter time frame.” Trimble uses the Connected Farm data management system as the all-encompassing instrument to manage information from whatever source. Although Trimble has its own UAS, called the UX5 Aerial Imaging Solution, it welcomes UAS input from other systems as well as data from, for instance, water management systems or soil profiles. For Trimble, the technological R&D synergy between precision agriculture in general and the UAS segment lies mainly in the data management aspect plus to some extent the use of software for image refinement.

In agronomy, developers are also concentrating on how UASs can be used for water management. Agriculture accounts for 70% of the world’s total fresh water consumption, but water is a very expensive resource and it is becoming increasingly scarce. Even in the UK, which has suffered serious flooding and long periods of rainfall, there are some parts of the country where no rain has fallen in four months. As a Brit by birth, Jim Watt monitors the situation . “The rain doesn’t fall in the period that it is needed, so nothing will grow there. Worldwide, the problem of aridity is huge. Irrigation management – to have the right amount of water available at the right time, in the right places – is very important in many countries, not only in Sub-Saharan Africa. UAS-supported water management is one of the priorities. UASs are used for taking images and doing very high resolution topographical surveys. You can follow up the plant stress and use the images for drainage planning, to plan irrigation control systems or detect water leaks.” A UAS allows the farmer or contractor to be able to acquire images of their fields just moments after heavy rainfall. Only such timely images can show weaknesses in the farm’s topographic state, and satellite or aircraft-derived images may not be able to be acquired and delivered to the farmer soon enough.

While those kinds of specific applications are attractive, regulations, payload restrictions and inefficient data handling are currently placing serious limitations on UAS use for large plots. Whereas a global regulation dictates that a UAS must always be in the line of sight, to fly the length of a whole field on some larger farms may entail a distance of a kilometre or more, and then back again. “If you could do that on a regular basis, on a scheduled flight path that is planned and programmed, then you would be talking about greater utilisation and ability,” says Watt.

In terms of farming regulations, Japan has been a pioneer and therefore the country’s agricultural UAS market is mature, with UASs already being used for crop treatments. Watt continues: “The modern UAS is efficient for the Asian type of farming with rice paddy fields of half a hectare or less, but the systems simply don’t have the range for treating an average maize farm in the US or wheat farm in Ukraine. And if you want to use the UAS for carrying a payload of liquids – pesticides, fertilisers, etc. – there are severe limitations. The battery lasts for about 60 minutes and you can load it with a kilo of chemicals…but what can you do with a kilo? Flying with chemicals in the air is also a problem.” From a marketing perspective, however, it is not necessarily a problem if UASs are limited to smaller farms since 74% of all farms worldwide are two hectares or less. Watt agrees: “We’re a long way from having a total solution for larger farms because of the payload and regulatory limitations, so today there is more potential on small farms. But if you could fly to a specific plant and treat it with a chemical, that would be a game changer for farms of all sizes. In order to be able to do that, the inability to transfer huge amounts of data during the flight from the UAS to the ground also has to be tackled.”

It would be a real bonus if the UAS could deliver something – a pesticide, a laser beam, etc. To facilitate spot-specific spraying, the UAS has to identify the problem with the plant, interpret that image in real time and distribute that information to the agronomist at the farm. “At the moment you need a number of market players in the value chain to get to a solution like that, and you have to transmit a tremendous amount of data from a vehicle in the sky. But the technology is there. The battery has to last longer, perhaps with solar power. In the military they can carry huge payloads of weaponry and fuel to fly enormous distances. The regulations dictate how big a distance we can fly and the weight of the vehicle currently determines the limitation band. If there were no limitations, we could make much larger UASs and fly every commercial mission,” says Watt, thinking out loud about the longer-term perspective. “Look at the existing ground-bound precision agriculture instruments. With GPS and auto steering, a tractor is automatically guided to the end of the field and turns to the next swath, but there’s still a tractor driver on board. Why? Because it’s not yet acceptable to have a 300-horsepower tractor roaming the countryside. So the robotics industry is looking at a smaller, less threatening, driverless tractor with driverless followers doing the same operation. Someone in a warm cabin at the edge of the field, controlling a string of tractors, could be the next thing. It’s the same with UASs: the technology is there, but perhaps we’ll have to turn around a part of the concept to fit in with the health and safety regulations.”

Jim Watt, a farmer’s son and agricultural engineer, has more than 30 years of global experience in the field of agriculture and precision agriculture. He has been working with Trimble since 2002 and is due to retire as regional director EMEA in Trimble Navigation’s Agriculture Division in the coming months.