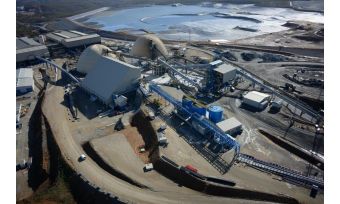 A growing number of mining companies are employing unmanned aerial vehicles (UAVs). Equipped with digital cameras, such remote-controlled small aircraft generate high-resolution aerial imagery which can be further processed to produce highly precise orthophotos, point clouds and 3D models. Surveyors and engineers can use this data to make statements and forecasts about the development of the mine, document changes as well as calculate volumes of spoil and stockpiles. In mines with both aboveground and underground areas, UAVs can provide important information about the state of the aboveground area, thus improving the safety of the workers underground. This was practised in an 80-hectare area of the Mina de Aguas Teñidas in Andalusia, Spain.

UAVs can assess hazardous areas by air that conventional equipment cannot reach, thus ensuring staff safety and offering numerous benefits in the mining industry. Which UAV is suitable for which mine depends on the desired result. In general, fixed-wing UAVs are used to map large areas. In contrast, rotary UAVs – multicopters with four to eight rotors – have shorter flight times, but can provide more accurate data. Rotary UAVs are also able to hover on the spot and thus perform inspection tasks. Furthermore, they do not need a runway as they rise vertically into the air. Hence, rotary UAVs are also suitable for the inspection of large, otherwise difficult-to-access devices and their components, such as the masts of draglines. Rotary UAVs can be deployed quickly and usually require minimal human resources – all that is needed for a survey flight is a pilot.

A UAV generates data of areas within a matter of minutes or hours, whereas several surveyors using conventional methods would need days or weeks and even then only be able to determine certain parameters. The UAV-generated data is comprehensive and can be processed in many ways. It can also be used later on for finding different measurements.

Survey of an Ore and Copper Mine in Spain

The Portuguese surveying and engineering company Geotrilho wanted to test the suitability of UAVs for the measurement of open-cast mines and collaborated with German manufacturer Aibotix to fly over an 80-hectare area of the Mina de Aguas Teñidas in Andalusia, Spain. This mine is one of the country’s current major industrial and mining projects and has a huge social and economic impact in the region. Due to its diverse structure, the site affords many different tasks for aerial survey and inspection, e.g. the measurement of earth movements or stockpile volumes, or the stakeout of concrete structures, metallic structures, pipe conducts, dams and machinery. Geotrilho was interested in testing the technology in order to decide about possible future applications and to investigate how UAV technology could complement other survey equipment like total stations, GNSS systems, terrestrial laser scanners and others. In this case, a rotary UAV was used to rapidly map a large area of the mine and measure stockpile volumes. Prior to the flight the surveying team, led by Mário Encarnação (geographic engineer and technical director of Geotrilho), defined a targeted data accuracy of 2.5cm. The experts then plotted 37 ground control points using tachymeter/precise GPS measurements evenly throughout the area of interest. Following this, the flight path was set using the flight planning software AirProFlight. A map of the terrain to be surveyed was taken from Google Maps and imported into the software, and a rectangular grid was superimposed onto it. The horizontal image overlap was set to 60% and the lateral overlap to 40%.

The Aibot X6 UAV was fitted with a 500g Nikon Coolpix A digital camera. The sensor had a resolution of 23.6 x 15.6mm, i.e. 16 megapixels. Within a 90-minute period, the hexacopter systematically flew along the predetermined grid at a height of 96 metres, photographing the ground below at a vertical angle. Overall, the UAV captured the 80-hectare area in 11 flights with a flight speed of 4m/s. Four strategically chosen points were used for take-off and landing. The Aibot X6 coped very well with the high wind speeds of up to 10m/s it experienced on that day. After the flight, the data (463 images) was imported into the photogrammetry software Agisoft for further processing. First, the images were georeferenced. Subsequently, the easy-to-use photogrammetric triangulation software was applied to generate a dense point cloud with 392 million points. The software allows the creation of high-quality orthophotos and point clouds from undistorted images with a minimum of manual interaction. The images are oriented and stitched in a fully automatic process. In this case, the computing process took six hours. In the final point cloud, the coordinates of the 37 previously measured ground control points were imported and the point cloud was adapted accordingly. Since the generated aerial imagery was already very precise, there were only minor transforming differences. In addition, the point cloud was adapted in terms of the camera calibration. Finally, a textured 3D model was generated from the point cloud.

Further processing was then carried out using the software 3D Reshaper. In general, the data can be easily exported to other programs by choosing from a multitude of file formats (point clouds, mesh, DEM, orthophoto). After the survey of the mine, a 3D model of a coal stockpile was created using the same method only without control points. In contrast to carrying out a survey from the ground, the experts were spared the tedious and sometimes dangerous process of climbing on the coal heap. The entire procedure, including data generation, took one hour. Both the speed of the data acquisition using the UAV and the high level of data accuracy of the UAV (Aibot X6) offer the potential to increase efficiency and cost-effectiveness for large-area surveying at a mining site. Geotrilho is considering use of this technology in multiple projects, including open-pit mines and dams, where the continuous calculation of volumes and the systematic monitoring of progress are crucial for investors.

In the mining industry, UAVs are currently primarily used to generate photogrammetric data. However, the unmanned aircraft can also be equipped with a hyperspectral sensor and be used for geological mapping of the area. They can, for example, fly over landfills and open mine sites to quickly and efficiently seek out precious metals or minerals. Some UAV manufacturers are also developing visual control technology that would work independently of GNSS or GPS. It would then be possible to use UAVs in underground mines, thus make surveying work there considerably easier. Developments are moving forward quickly and continue to remain exciting.

This article was published in the GIM International UAS edition 2015. For a PDF of this version go here, under UAS.