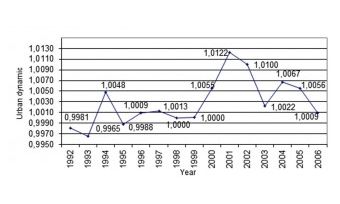 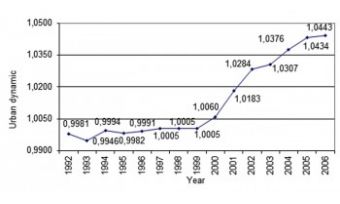 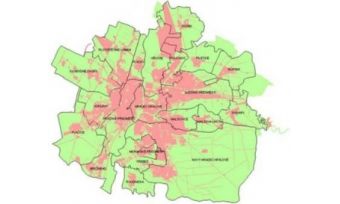 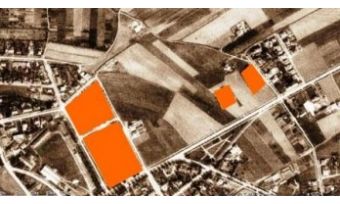 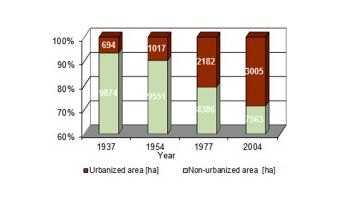 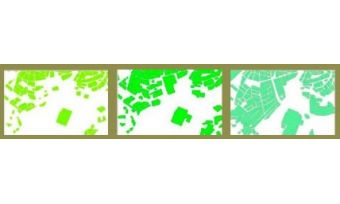 Determining changes in the built-up area over time can be done in many ways. In the Czech Republic, only the large cities can afford to monitor such changes using advanced and expensive datasets such as aerial imagery and tools like GIS. Statistical and cadastral data is available countrywide which also allows small municipalities with limited means to monitor urban dynamics. The authors have developed three approaches of increasing complexity with associated cost levels. The resulting spatial development indexes of all municipalities are published on the web on a regular basis

One of the many challenges today’s cities are facing is spatial expansion combined with shrinking population density. That means that there are fewer taxpayers per square kilometre of built-up area, which impedes proper management of settlements. To monitor and control urban expansion, central and local planners need regular data on the growth rate, size and location of built-up areas. The way of calculating these parameters depends on available data sources, their temporal resolution and the type of users. The three approaches presented here have been developed for the Ministry of Regional Development which monitors urban dynamics for spatial planning purposes. Each of the three approaches has a different degree of complexity, beginning with basic followed by advanced and then sophisticated.

The basic approach has been designed for all 6,251 municipalities, of which just under 10% are cities. Small villages, which are governed by a

mayor supported by an assistant, do not have a spatial planning office. Therefore this approach is centred on cadastral data, which is available online and free of charge to municipalities. Together with statistical data and data on building permits, contracts and so on, the cadastral dataset provides sufficient information to calculate indicators of urban dynamics on a yearly basis. The land use types distinguished by the cadastre are grouped into two main categories: urbanised and non-urbanised (Table 1). The regrouping is done annually.

Since the statistical office provides figures by the end of every year, indicators of urban dynamics can be computed on an annual basis. The key indicator is annual growth of built-up area expressed as a percentage with respect to the previous year. For example, the city of Vsetín showed an annual growth in built-up area of 1.2% in 2001 which is the largest expansion over a period of 15 years (Figure 1). Since then, the trend has been decreasing. The second indicator calculates the growth with respect to a reference year (Figure 2). A useful reference is the year of approval of the municipality’s master plan as this helps planners to evaluate its impact on spatial dynamics. Another useful reference is the year of the Population and Houses Census which has been carried out every 10 years since 1868; the statistics provide information on expansion of built-up areas and thus urban dynamics over 10-year periods. Especially for the authorities in small municipalities, simplicity is essential.

Therefore it is important that the calculations can be performed automatically and the results are presented in a user-friendly way.

Since municipalities have online access to the cadastral data, the calculations can be done online but there is no real need for frequent evaluation. The results are – among other data – also input to determine the impact of land use changes on the sustainable development of the settlement, which is a mandatory activity in accordance with the Building Act.

The advanced approach uses municipalities’ master plans and other documents available in cities’ spatial planning offices. The geodata is available in vector data format in accordance with legislation. Those municipalities that have converted CAD drawings into digital geodata are able to evaluate urban dynamics in a GIS environment. Particularly large cities use GIS. Essential data concerns land use and ideally this should be the current use. All use types of parcels on the master plan have to be aggregated in either urbanised or non-urbanised. Urbanised is subdivided into fixed (continuation of the present land use) and areas which need redevelopment. The latter should include brownfield sites; these are areas where the former land use, often industrial, has been abandoned while revival is pending. Non-urbanised is subdivided into fixed areas, areas due to be urbanised, and areas to be changed to another non-urbanised use.

Table 1, Regrouping of cadastral land use types into urbanised and non-urbanised.

The situation immediately after approval of the master plan may act as a starting point for computing urban dynamics over the years. The calculation is similar to the one used for the basic approach. Final results can be presented alphanumerically or as graphs and maps (Figure 3). This approach distinguishes urbanised from non-urbanised areas more reliably than the basic approach and allows evaluation of the impact of changes in the master plan. It suffices to determine the indicators every four years as the changes in land use are gradual. Furthermore,

calculations over the space of several years results in larger numbers, which are more impressive to politicians. For example, an annual change rate of 0.7% sounds modest while a 3.5% change rate over five years is likely to attract more attention.

The sophisticated approach uses digital aerial images from the military which has been capturing the entire territory of the country every decade since the 1930s at a scale of 1:5,000. This imagery enables analysis of urban dynamics over a time span of almost 80 years. The boundaries of urbanised areas are digitised as shown in Figure 4 and – as they are georeferenced – can be combined with other GIS data. The temporal resolution of 10 years allows computation of municipalities’ urbanisation rates over time (Figure 5) and the spatial evolution of built-up areas to be mapped (Figure 6).

The three approaches have been certified by the Czech Ministry of Regional Development and can be used as a tool for the biannual evaluation of sustainable development of settlements. Gradually, small municipalities will replace their CAD data with geodata which supports an upgrade of their approach from basic to advanced or even sophisticated.