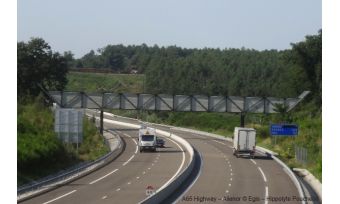 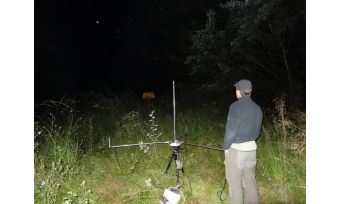 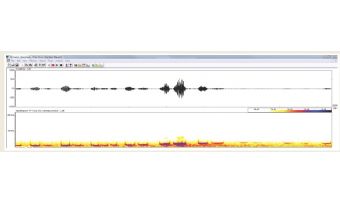 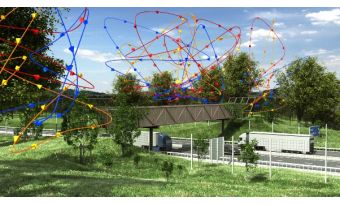 Infrastructure plays a significant role in disrupting the flight paths of bats. Traditional methods of monitoring bat movements are rather limited and often prone to error. Using acoustics, GIS and 3D simulation engines, the Bat3Data system enables the field ecologist to differentiate between species and trace their flight paths in 3D along existing and proposed infrastructure. This helps to gauge the efficiency of gantries, bat bridges and underpasses in helping bats to cross roads and railway lines. The system can help to improve the remediation of ecological corridors affected by infrastructure.

With large-scale infrastructure like roads and bridges crisscrossing areas that are often ecologically sensitive, it is vital for planners and engineers to take into consideration the impact this has on the local flora and fauna. Bats are among many creatures that are affected when infrastructure cuts across their usual flight paths. Although they exhibit a tendency to avoid vehicles on heavily trafficked roads, a large number of bats nevertheless perish as road kill. As a result of avoiding flying across roads, populations either get cut off and start diminishing or end up having to develop longer routes. Apart from roads and railway lines, other man-made structures like wind turbines can also prove to be death traps for bats. Every year, a significant number of them are either cut down by the blades of turbines or suffer barotrauma-related injuries when internal organs are damaged due to the rapid changes in air pressure around the blades. According to a recent report, over 250,000 migratory bats are killed every year by wind turbines in Germany alone.

Bats are not just ecologically important; their conservation makes economic sense too. The creatures feed on insects, which according to recent research saves an estimated USD3.7 billion a year in the USA alone thanks to the reduced reliance on expensive pesticides. This saving does not include the further economic and ecological benefits of not having the excess pesticides leach out into the ecosystem. Bats also play a significant role as plant pollinators. For certain species of bananas, mangoes, durian, etc, one study has estimated the value of fruit bats at over USD200 billion worldwide.

Bats are protected under the EU Habitats and Species Directive (92/43/EEC). All bats fall under Annex IV (Animal and plant species of Community interest in need of strict protection) and certain species also fall under Annex II (Animal and plant species of Community interest whose conservation requires the designation of Special Areas of Conservation). In the case of road and rail construction, this protection usually boils down to some form of a bat bridge or gantry made of wires, a more robust green bridge or an underpass. The frequency at which these ‘corridors’ are being set up suggests that these are best practices. There is some evidence suggesting that certain species of bats may prefer a particular type of corridor, whether a gantry or an underpass. However, the scarcity of quantitative research data renders their efficiency in serving as crossover points for bats questionable.

Currently, bat movements are tracked either visually by expert bat ecologists in the field or using bat recorders. However, both these methods have limitations. Visual identification of bats in near darkness is prone to errors. It is also a challenge to describe the actual flight paths of bats, which can often necessitate a fair amount of interpretation and assumptions. Most bat recorders register the presence of certain bats depending on how the devices are located. However, such devices cannot track the actual flight paths taken by the bats and do not indicate whether a bridge or gantry is successful in guiding the bats along the desired path.

In order to test the efficiency of a bat bridge, a team of ecologists and geospatial specialists at Egis teamed up with acoustic engineers at Cyberio to design Bat3Data, a non-intrusive monitoring system that would use a bat’s own echolocation calls to locate its position and track its movements in 3D. Bats emit ultrasounds for echolocation that are constant frequency (CF), frequency modulated (FM) or a combination of both CF and FM. These calls are unique for a given species of bat, and within a species individuals can also be distinguished through variations in their calls. In a test, field ecologists arrange arrays of high-sensitivity ultrasound 3D microphones as tetrahedrons and place them at locations in and around the designated corridor, along established flight paths and close to roosts. With the help of a field computer, the bat calls registered by the microphones are stored in uncompressed audio files. The duration of these recordings is generally around 3 hours and is currently limited only by the available battery pack in the field. The range of the system depends on the species of bat being tracked. Pipistrellus and Myotis species can be detected within a range of 20-40 metres, while the species of Noctula, Eptesicus and suchlike can be sensed at up to 100 metres.

Later, the recordings are run through a process in which the spectrograms are analysed of only the recordings free from additional noise. The resulting sound bites are run through an internally developed bat-call detection and identification algorithm which enables the operator to distinguish the species. Due to the arrangement of the microphones, the time a bat call takes to arrive at each of the microphones is unique. Using this difference, Bat3Data triangulates the location of the animal at that moment in three dimensions. A GIS system is used to convert these 3D locations into an actual flight path with the help of time signatures of each call.

The resulting flight path is overlaid on to a 3D model of the environment that includes the infrastructure along with the surrounding terrain on a 3D GIS. The results are also integrated into a 3D simulation engine which allows one to walk about the gantry or underpass in 3D and visually track and confirm bat flight paths. This helps the ecologist to gauge whether the corridor is successful or not. With the Bat3Data system, one also has a visual representation of which bat species have a preference for above-ground crossing and which ones prefer underpasses.

This approach was successfully used along a number of roads in France – the A406 south of the city of Mâcon and the A65 linking Langon to Pau – as well as along a railway line near Lyon. These areas are known to be along the flight paths of at least six well-known species of bats including the Common Pipistrelle and the declining Greater Horseshoe Bat[1].

A host of applications

The developed solution aids in assuring a higher level of ecological invisibility of large infrastructure like roads, railway lines and bridges. It enables the results of a field test to be used to evolve designs of gantries and underpasses that are more suited to the species populations in the area. It can also be adapted to study the movements of bats around wind turbines, which may help researchers to develop mitigation systems that will reduce the number of bats killed or injured by these vital sources of sustainable energy. In effect, through flight-path tracking, the system opens up a new dimension in studying bat behaviour at a species level and the interactions that may be present between various species.

The use of a 3D simulation engine can also serve as an important visual communication tool for stakeholders and the public during mandated public enquiry meetings. The Bat3Data system, which recently won an innovation award in the Biodiversity and Companies category by the French Ministry of Ecology, Sustainable Development and Energy, offers an innovative monitoring opportunity that can help engineers to better design and fine-tune corridors that are more efficient in guaranteeing the safe passage of bats.

Vivian Raiborde holds an MSc in Environmental Sciences and has over 15 years of experience in the geospatial industry. He loves all things ‘tech’ and is a promoter of geospatial applications in the group. Vivian was involved with the development of the software used for the Bat3Ddata system.

Frédéric Jehan, Msc, is an experienced GIS expert at Egis Environment with long-standing experience in 3D applications and their representations. In this project, Frédéric worked on the solution to represent the 3D trajectories within their local environment.

Hippolyte Pouchelle, BSc, is the principal developer of the Bat3Ddata tool. He is an experienced bat worker and project manager on environmental engineering projects. A qualified tree and rock climber, Hippolyte often performs bat roost inspections. 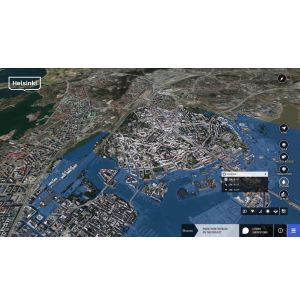