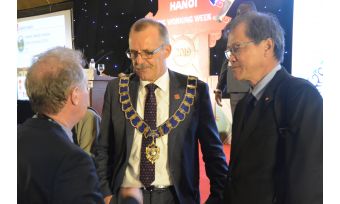 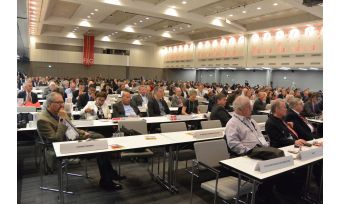 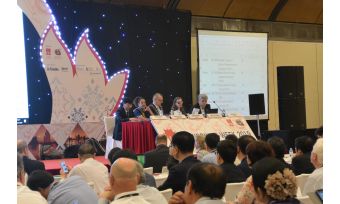 Today is 10 May and under normal circumstances, we the International Federation of Surveyors (FIG) would have our first General Assembly in the framework of the FIG Working Week 2020 scheduled from 10 to 14 May in the RAI-convention centre in Amsterdam (The Netherlands).

However, as you all know, due to the global outbreak of COVID-19 and the related legal restrictions, it was impossible to organize this event in a normal way. As a kind of compensation, FIG is very happy to offer at least an alternative format that is a kind of Virtual Working Week – VWW 2020, or the "Working from home Week".

Last week, we announced the FIG Working (from home) Week with a sneak preview on what to expect during this week.

Normally, a city and conference venue would be buzzing with surveyors and geospatial experts from all over the world, excited to meet (again) and we would all be eager to get started.

Today, with this different kind of opening, hopefully, we can give you an impression that FIG Working Week is starting, however in a different way than normal. The FIG Fanfare should have marked the opening of the Working Week and the General Assembly.

Short history of the cancellation

Until the beginning of March 2020, LOC and FIG-Council were quite optimistic regarding the organization of the Working Week in May. Once the global lockdown started, it became more and more obvious that a normal organisation will not be possible. Some of our registered participants, who had already paid the registration fees, contacted the FIG Office and asked impatiently for a cancellation. At Mid-March it was in principle clear that the Working Week will not take place. However, LOC decided together with FIG Office that it would be much better to “wait” for an official ban for bigger gatherings from the Dutch authorities. This finally happened on 23 March and we could cancel the Working Week with a much smaller damage to our financial obligations.

The Conference Directors Paula Dijkstra (Dutch Kadaster) and Louise Friis-Hansen (FIG Director) are happy and proud to announce the first Working - from home - Week in the history of the International Federation of Surveyors (FIG). You are all invited to participate in an active manner. Over the next 4 days FIG will publish every day specific articles and highlights in relation to the Working Week

Yesterday we had already the 5th Young Surveyors Conference – Social Distancing Edition. And at least our Youngsters are really global. They organized on one day four Regional Conferences, the first for Asia Pacific at 9:00 UTC+8, the second for Europe and Africa at 9:00 UTC+1, the third for Latin America in Spanish language at 9:00 UTC-3 and the forth for North America at 9:00 UTC-6. What a brilliant format!

What to look forward to:

The technical programme for a Working Week is filled with exciting topics of present and future interest. At the first glance the technical programme can seem overwhelming. 10 sessions are taking place in parallel, and as it is physically impossible to be in two places at the same time, so many struggle with the choices; what sessions should I attend, what topics are of most use to me, what would I want to learn and be inspired from. This year we will be helping you to make these choices. And you are not restricted by timing.

So, during the following 4 days please follow the daily newsletters:

It is difficult to include all the many activities during the Working Week. Apart from the above-mentioned articles that you can look forward to during this coming week, I would also like to highlight a few special sessions that might interest you:

UN-Habitat/Global Land Tool Network (GLTN) had three planned joint sessions in the programme. One in cooperation with FIG Young Surveyors Network, and the two other sessions include topics on the two activities that the Professional Cluster is working on:

TS04J: Interactive Session on the Development of the Manual for the “Valuation of Unregistered Lands and Informal Property"

The UN-Food agriculture Organisation (FAO) and FIG have worked on 3 sessions for the technical programme. One or two of these sessions might be held as webinars during these coming months, so please look out for announcement of this. Planned sessions were:

TS01I: Land Consolidation Legislation: FAO Legal Guide and its Application at the Country Level
TS02I: The Role of Land Consolidation and Other Land Management Instruments in Development of Agricultural Land Markets – in cooperation with FIG Commission 8 on – Spatial Planning and Development
In cooperation with FIG Commission 2, the FIG Academic Forum on VGGT
- VGGT and the UN Convention to Combat Desertification into the implementation of the Convention, TS03A

UN-ECE and FIG had planned a session which would include the launch of the recent publication Guidelines for the formalization of informal constructions which is a brief, practical and easy-to-read guide, explaining how to structure a program for the formalization of informal construction. Please look for an announcement for a webinar in the coming months.

TS07B: Launch of the Guidelines for the Formalization of Informal Constructions

Director Generals Forum – is a forum that has taken place now for a number of years and brings together Chief Executives, Director and Surveyor Generals of national (or sub-national) public agencies who are responsible for land management and related tasks (FIG Affiliate Members). Focus is on the role of National Geospatial Agencies today and in the future, their position in a changing world, as well as challenges and chances to their roles.

The yearly General Assembly is where FIG members meet, and the place where the direction of the federation is outlined. New association members are adopted by the General Assembly, appointments and votings are taking place as well as updates from council and chairs.

Finally, Council agreed to postpone all agenda items until next year. This decision was however not done easily. My council and I had looked forward to this particular General Assembly. Based on feedback from previous years and from the current Task Force on Governance, we had prepared for a different General Assembly. A more inclusive General Assembly. A General Assembly that instead of being dominated by reports and one-way communication would use the time on ideas, debates, and involvement, and with the expectation that all had read the reports in advance.

The agenda including all reports were published in March. Although the General Assembly agenda items are postponed to next year, we still encourage you to read through the agenda and especially the reports from this year.

Please note that if you have any comments to the agenda items or to the reports you are always welcome to drop an email to Louise ([email protected]).

The Task Force on Governance had also looked forward to discussions with all FIG members. The Task Force had planned three debating platforms during the Working Week. Starting with a debate at the General Assembly followed by a roundtable meeting in which specific questions were supposed to be debated. Further discussions were planned to be held in the FIG Member Associations and Regional Bodies Forum. Instead, the chair of the Task Force Vice President Diane Dumashie will prepare a video presentation of the findings and questions for debate and we hope that you will contribute to this debate. Look out for more information on this.

You can also visit the Task Force page which is being continually updated.

I had also looked forward to the Presidents meeting. Last year we changed the format of this meeting. It was moved from the second General Assembly day to a session during the conference days, and one overall question was used as main discussion point at the meeting. This year I had looked forward to discussing with all members “how can the General Assembly be made more interesting and attractive?”.

It is a strange and empty feeling that the General Assembly does not take place today. I and my council will do our utmost to serve the federation during this next year until we will hopefully meet in the Netherlands in 2021.

Traditionally, this first day of the Working Week and General Assembly closes with the Welcome Reception. The Young Surveyors Charity Event should have been part of this Welcome Reception, open for all and with specific focus on “Mapping the Plastic”.

I hope that, today, spread all around the world, you will toast with us for the opening of this alternative Working from home Week.

FIG Council at the General Assembly at Working Week 2019 in Hanoi, Vietnam