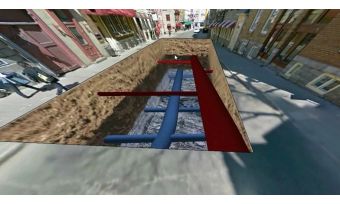 I recently attended a seminar on the application of 3D, virtual reality (VR) and augmented reality (AR) for local authorities in The Netherlands. A couple of years ago, VR and AR were announced to much fanfare as the next big thing that would revolutionise the surveying profession. But not much has actually happened since then. Well, maybe I am exaggerating a little, but the proclaimed transformation to an immersive or interactive environment has not taken place on such a scale as to send massive shock waves through the geospatial industry. However, the event I attended highlighted a surprisingly large number of applications for implementing these technologies – and not just for the sake of being a front runner and demonstrating how slickly your organisation has entered the modern era.

Instead, 3D and VR/AR techniques are being used to inform citizens about the impact of the installation of new wind turbines, for example. 3D modelling is already widely used by geomatics professionals, of course. However, it is now increasingly becoming a tool used by local governments too. Obviously, 3D models are very suitable for visualising development plans, and they help to involve citizens in the planning process. How will the direct vicinity – their local neighbourhood – look after it has undergone major restructuring? 3D models, AR and VR offer tremendous possibilities for smoothing this process in completely new and innovative ways. Participatory spatial planning has only just begun! And with smart cities as one of the key topics in the geospatial debate, it seems like everything is falling into place at the right time.

VR and AR are important elements to support the implementation of the smart city concept. All of this requires huge volumes of data, so superfast mobile internet is absolutely crucial. 5G will bring the solution, as it will interconnect and control machines, objects and devices in a fast and smart way. Combining 5G with 3D, VR and AR will catapult the smart city concept so that these technologies will finally deliver on their promises. And as for geomatics, a smart city won’t be smart without it!