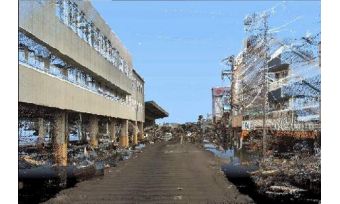 The vehicle-based laser mapping system StreetMapper is being used to assess the structural damage caused by the Japanese earthquake of 11 March 2011. The mobile mapping system, purchased from Mirukuru and operated by Asia Air Survey, has been used to capture highly detailed 3D survey data. This data will also be used to survey the effects of soil liquefaction (loss of strength from saturated soil) which is an important factor in the disaster-hit area where much of the land is reclaimed from the sea.

The Tôhoku or Great East Japan earthquake was the most powerful earthquake known to have hit Japan and one of the ten most powerful in the world since modern record-keeping began in 1900. The quake then triggered a destructive tsunami with waves of 38.9 metres travelling up to 10 kilometres inland. Asia Air Survey had just taken delivery of StreetMapper, which they have named Geomaster Neo, and StreetMapper product manager Chris Cox was on site at the company's offices in Kanagawa on the outskirts of Tokyo when the quake struck. Fortunately the building only suffered cosmetic damage and no-one was hurt.

Shuhei Hatake, general manager of Asia Air Survey's Geospatial Product Centre recently reported that they had captured 100 kilometres of survey data using the system along the roadways of Sendai, the largest city in the Tôhoku region. Asia Air Survey is currently processing the survey data in order to quantify structural damage suffered as a result of the earthquake and to measure water levels attained by the tsunami, evident from stains left on structures and debris elevations. It is hoped that this information will prove a valuable resource for remediation works and from which to assess future vulnerabilities and prepare emegency responses.