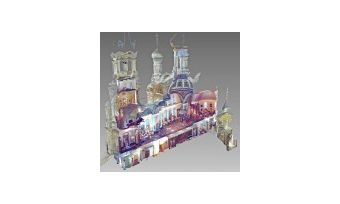 The orthodox Church of St Peter and St Paul is located in the Czech spa city of Karlovy Vary, formerly known as Karlsbad or Carlsbad. Constructed in the last decade of the 19th century in a Neo-russian style, the outside is finished with rich decoration and a central tower and is surrounded by four smaller towers, all with onion-shaped gilded domes. The church is full of intricately rendered icons and complex decorations including a relief featuring a rendering of Tsar Peter the Great.

In view of the intricate shape of the church, only 3D laser technology was able to capture all the details. The BWPS team completed 140 scans from different locations both inside and outside the church and the rectory. 41 scans measured the exterior of the church - including several from the roofs of surrounding buildings. 51 scans measured the church interior including the nave, sanctuary and educational facilities. And a further 48 scans measured the inside and outside of the rectory. All of the laser scans were combined and exported to Pointools where they were unified to produce a point cloud with 500 million points. Using the Pointools Plug-in for Rhino, BWPS was then able to create their many required deliverables.