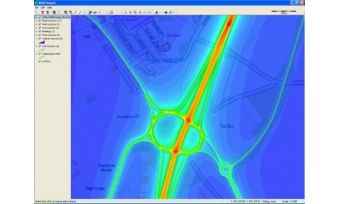 Before ADMS Mapper became available, users of ADMS had to buy third-party GIS software such as ESRI ArcGIS or MapInfo to visualise their modelling scenarios. ADMS is used by hundreds of people in over 30 countries for dispersion modelling of urban air pollution and calculation of air pollution concentrations. Users include regulatory authorities, government organisations, industry bodies, environmental consultancies and academic institutions.

In 2013 CERC updated its Mapper application to use the TatukGIS DK v10 in order to take full advantage of the new 3D mapping capabilities the DK component provides. The new Mapper v2 is now an ActiveX library (DLL) that is installed as a shared component so that it can be used by multiple products CERC develops. Accordingly, the Mapper v2 was released during October-December 2013 with the latest versions of ADMS-Urban, ADMS-Roads, and ADMS-Airport. The flexibility of developing a plug-in GIS tool in-house using the TatukGIS SDK has meant CERC can provide stunning GIS capability in many products quickly and with reduced development costs.

More detailed information about CERC and its ADMS software, including the user guide, is available at: www.cerc.co.uk.