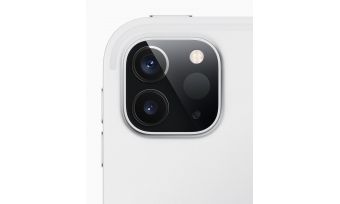 Apple has announced its most advanced iPad Pro ever, which even includes a Lidar scanner. Equipped with the A12Z Bionic chip, the new iPad Pro is faster and more powerful than many PC laptops. The breakthrough Lidar scanner delivers depth-sensing capabilities, opening up more specialized workflows and supporting professional photo and video apps in combination with the ultrawide camera and studio-quality microphones.

The Lidar scanner – along with pro cameras, motion sensors, pro performance, pro audio, a Liquid Retina display and powerful apps – lends weight to Apple's ambition to offer the world’s best device for augmented reality (AR). The California-based high-tech giant has been working on bringing Lidar technology to the consumer market for years.

The breakthrough Lidar scanner enables capabilities never before possible on any mobile device, and brings Lidar to the consumer market. The Lidar scanner measures the distance to surrounding objects up to 5 metres away, works both indoors and outdoors, and operates at the photon level at nano-second speeds. New depth frameworks in iPadOS combine depth points measured by the Lidar sensor with data from both cameras and motion sensors. The result is enhanced by computer vision algorithms on the A12Z Bionic chip for a more detailed understanding of a scene. The tight integration of these elements enables a whole new class of AR experiences on the iPad Pro.

The Lidar scanner improves the Measure app, making it faster and easier to automatically calculate someone’s height, while helpful vertical and edge guides appear automatically to let users measure objects more quickly and accurately. The Measure app now also comes with Ruler View for more granular measurements and allows users to save a list of all measurements, complete with screenshots for future use.

The Verge reports that "alongside the AR version of Hot Lava, Apple also showed some other impressive uses of the Lidar scanner to journalists over a briefing earlier today. One, for the CAD app Shapr3D, scans a room and makes a 3D model of the room in the app. Users can then edit that model to add new objects into the room and look at those additions in the real room using AR."

According to Wired, the Lidar scanner on Apple's newest iPad was actually not solely designed for the iPad. Although Apple has chosen the iPad Pro as the first device on which to introduce the Lidar scanner, it is more than likely that one or more of Apple's 2020 higher-end iPhone 12 models will be supporting this technology as well.

It is safe to say that equipping its newest iPad with Lidar puts Apple in pole position to bring Lidar to the masses. The launch of the iPad Pro marks a major milestone, since the democratization of Lidar has been a topic of considerable debate for some time.

Besides the advanced Lidar technology, the new iPad Pro features a very impressive camera system: a 12MP wide camera for capturing stunning photos and 4K video, plus a 10MP ultrawide camera with double zoom-out to capture a much wider field of view. Adding a second camera also doubles the photo and video possibilities, enabling different perspectives and multi-camera use.