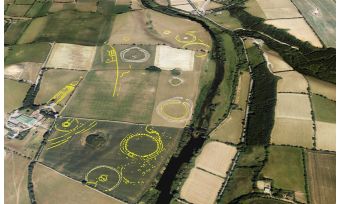 The National Monuments Service in Ireland is using high-resolution aerial photography from Bluesky to map and investigate a giant 4,500-year-old henge. The circular structure, located at the Brú na Bóinne UNESCO World Heritage Site, is evidence of prehistoric earthworks and was first observed by researchers using drones. Following the discovery, the National Monument Service of the Department of Culture, Heritage and Gaeltacht carried out extensive aerial reconnaissance, including commissioning Bluesky Ireland to survey the cropmark enclosure at Newgrange.

“This new information is a graphic illustration of the extent and density of the ritual and ceremonial sites associated with the Newgrange Passage Tomb,” said Joseph Madigan, T.D., Minister for Culture, Heritage and the Gaeltacht. “This stunning new archaeological data provides fresh, spectacular and unique insights into the origins and development of the Neolithic landscape and society.”

Researcher and photographer Anthony Murphy flew his drone over the Boyne Valley and located a large, circular crop mark in open farmland, indicating the presence of buried archaeological features.

Following the initial discovery, the NMS used GIS to organise views of the landscape across maps, photographs and drawings of cropmarks identified to date. The location of the newly identified site was also visited to enable a better understanding of the topographical locations and the physical and visual relationships between sites.

NMS also availed itself of historic imagery and commissioned aerial mappings specialist Bluesky Ireland to capture the most up-to-date and detailed view of the landscape and discoveries. Bluesky also supplied 3D height measurements in the form of a one metre resolution Digital Terrain Model (DTM) which is being used alongside various layers of mapping including Ordnance Survey data.

A newly published report – The Archaeology of the Brú na Bóinne World Heritage Site Interim Report – details information on the discoveries. Reinforcing the remarkable level of ceremonial and ritual use of the landscape during the prehistoric period up to 5,000 years ago, immense enclosures of timber uprights and large henges have been identified. These monuments, visible only fleetingly as cropmarks during the dry summer and recorded by Bluesky, clearly form a deliberately structured and ritual landscape of great significance.