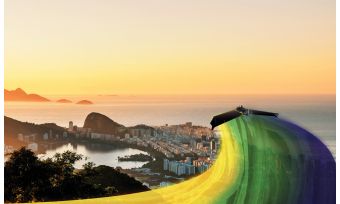 senseFly, a provider of fixed-wing drone solutions – in collaboration with drone engineering and consulting specialists AL Drones and geo-technology company Santiago & Cintra – has announced that the National Civil Aviation Agency (ANAC) has approved beyond visual line of sight (BVLOS) flights to be carried out in Brazil for the first time in the country’s history, using senseFly’s proprietary drone technology.

ANAC’s decision means that the senseFly eBee Classic, eBee Classic RTK, eBee Plus and eBee SQ are now officially approved for use in future BVLOS missions carried out by Brazilian drone operators. As the first BVLOS approval ever achieved in the country, the announcement marks a pivotal point in Brazil’s commercial drone industry and will play an important role in defining risk models and shaping safe, fit-for-purpose BVLOS regulations in Brazil.

The authorization comes almost two years after the publication of regulation RBAC-E94 in 2017, which legislated the use of drones for civil applications in Brazil. With this historic approval, senseFly drones become the first and only in the country permitted to fly 400ft (120m) in height with a 5km radius from a licensed pilot or observer – in comparison to VLOS operations, which restrict the current use of drones to a 500m radius. A major benefit of this new authorization is that drone operators can now navigate and map larger and more remote areas, which will expand the professional use of drones in a diverse range of sectors.

“The participation of senseFly was fundamental, and the technical quality of the senseFly eBee line helped streamline the entire process. It was necessary to develop a series of manuals, documents, technical reports and tests (in laboratory, ground and flight) proving that senseFly remotely piloted aircraft systems (RPAS) met all safety criteria defined by the standard.” said Eduardo Oliveira, President, Santiago & Cintra.

“With correct planning, and communications with local air traffic control, BVLOS operations can be an incredibly efficient mapping tool. This groundbreaking decision will open up new opportunities for commercial drone use in Brazil and help to deliver a more cost-effective and efficient method of working for drone operators, civilians and governments.” said André Arruda, drone associate, AL Drones.

In 2017, senseFly became the first drone operator to be granted ‘anytime’ BVLOS authorization in Switzerland. Its systems are also approved for BVLOS use in France, Spain, Denmark and China. senseFly was also one of several organizations that were instrumental in the success of last year’s groundbreaking Unmanned Traffic Management (UTM) demonstration in Geneva (Swiss U-space demo). The eBee Plus, eBee SQ and albris were designated ‘Compliant Unmanned Aerial Vehicles (UAV)’ by Transport Canada in August 2017, while senseFly’s original eBee drone became Canada’s first compliant fixed-wing drone back in 2015.