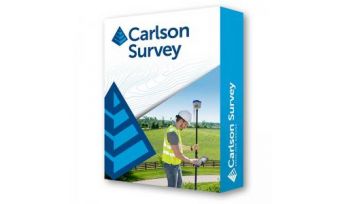 In the LotNetwork routines of Carlson Survey 2018, users now have the ability to setup multiple building footprints with their individual dimensions and setback requirements and designate the order of placement priority. Each lot is then automatically drawn with the building footprint as designated. There are also new options to leave empty lots and to draw driveways.

Legacy users probably will be glad to see some of the more traditional AutoCAD commands now included in 2018 like AutoCAD line and Polyline.

Some of the improvements to Carlson Survey 2018 OEM include a COGO Distance Input, an added method to input distances by point numbers using # as the delimiter, and geoid utilities – a new command to report geoid values, apply geoid values or switch the geoid for points. Also worth mentioning is the Field to Finish feature, including several new special codes for controlling labels, non-surface points, GIS attributes, 3D entities and labeling offset line elevations. The new version further includes added options to mask point labels, compare points in drawing on startup, more control over merge, export and the Point Group Manager and a new command to store points to an on-line data base publicly or privately

All versions of Carlson Survey, which benefit from more than 30 years of continued improvement, are designed for use for land surveying, providing a full tool kit for surveyors with everything from network least squares to surface modeling. Users get the ability to work seamlessly between the office and the field and they can establish company-wide design styles to ease and speed their work.

A full list of the Carlson Survey 2018 OEM new features can be found under the recent improvements tab on the Carlson Software webpage.