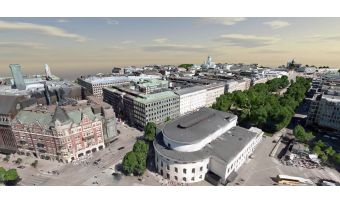 The city of Helsinki in Finland is mid-way through an initiative to capture the city and create a new 3D city model that is scheduled to be completed in 2017. Helsinki has a long tradition of 3D city modelling, dating back to the 1980s. Helsinki wanted to update its current 3D city model with new, innovative applications that could provide entire city modelling capabilities in order to improve its internal services, promote smart city development, and share data through an open format for citizens and other agencies. Helsinki also wanted to create a pilot portfolio to showcase the power of reality modelling in coordination with local universities to generate interest in academic organisations.

This EUR1 million project used Bentley applications to encourage commercial research and development and public engagement. For example, the city used Bentley Map to create accurate base maps and geo-coordinate utility networks. It also used Pointools to pre-process laser scanning data, Bentley Descartes to integrate oblique, raster files, and orthophotographic images into its infrastructure workflows, and Bentley Navigator for clash detection and design reviews. Reality modelling applications the city used included ContextCapture for the entire city mesh model and Bentley LumenRT to enliven designs. Lastly, the city used ProjectWise for collaboration and managing all the data that would be uploaded to a Web portal for distribution and general access.

The unique nature of this project ensured Helsinki would share data internally and externally. External agencies requesting the 3D city model included 3D Plus and 3D GPC – a flagship, low-carbon programme that looks at the benefits of 3D modelling as opposed to other methods. Helsinki is also sharing this data with the Technical University of Munich as part of its Solar Energy Potential programme.

By utilising Bentley’s reality modelling applications, the City of Helsinki has opened up its data to a host of internal and external stakeholders. This has ensured Helsinki is at the forefront of smart city initiatives, including collaboration with the Open Geospatial Consortium on smart-city programmes across Europe.

During the Bentley Year in Infrastructure Conference in London the Helsinki 3D+ project was awarded with the Be Inspired Award in the category Innovation in Reality Modelling.