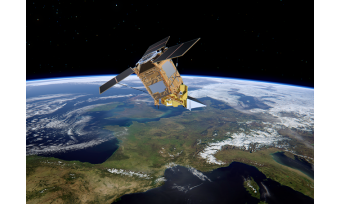 The AI Moonshot Challenge aims to boost the use of space data, combined with artificial intelligence, in advancing scientific research and developing innovative solutions to societal problems. The application process for the first edition of this international competition is now open.

The challenge addresses universities, research institutes, state laboratories and or companies, including startups, that combine satellite data and artificial intelligence to develop R&D activities to detect, track, characterize and quantify different types of plastics in the oceans, also considering rivers, lakes or potential places of origin.

“The plastics that pollute the oceans can have very different origins: they can come from land, or be dropped directly into the oceans by fishing boats or ships, and vary in shape, composition and size,” explains Carolina Sá, industrial relations and project officer for Earth Observation at Portugal Space. A meaningful part of this waste is invisible to the naked eye, the so-called microplastics, but others have significant dimensions, such as fishing gear left at sea. “The identification, quantification and monitoring of this waste is crucial to understand the problem in all its dimensions and assess which corrective or preventive measures will be most effective,” adds the marine science specialist.

Over 4.8 million tons of plastic waste ends up in the oceans every year. This part of marine pollution is a problem that is only beginning to be understood, but that needs to be urgently addressed by the impacts it causes on marine ecosystems, including environmental, economic, safety and even public health problems.

The impact of marine pollution

A study conducted by the United Nations in 2014 shows that some 700 marine species and 500 freshwater species have already ingested or become trapped in plastics. Pollution not only has an aesthetic effect on the coastal areas, but it also blocks drainage systems, creates an environment favourable to the reproduction of disease vectors. The same document calculates at US$13 billion/year the impact of marine pollution on the fishing industry, tourism and maritime transport.

The Portuguese Space Agency is challenging researchers and companies to gather “satellite data and Artificial Intelligence to create tools that contribute to solving this problem, helping to identify and monitor plastic debris on a local and global scale”, tells Carolina Sá.

The best proposal will win up to EUR 500,000 as a prize to fund a research project lasting up to two years and based in Portugal. The rules of the competition also state that more than one team can be selected as long as the total budget doesn’t exceed EUR 500,000.

The AI Moonshot Challenge is open to national and international entities, the latter being obliged to work in close cooperation with Portuguese institutions which should be project leaders or should establish activity in Portugal.

“This challenge has a clear worldwide reach as we aim to find solutions that can be applied anywhere, but it also has a crucial national element, as we intend to promote the development of national technology or encourage the transfer of knowledge and technology to Portugal“, states Carolina Sá. The Portugal Space project officer adds that the proposal submitted by foreigner entities must “provide guarantees that they will be able to develop activity from Portugal”.

The proposal will be evaluated by an international jury of experts in the fields of Satellite Remote Sensing and Artificial Intelligence, chaired by Paolo Corradi, a systems engineer from the European Space Agency (ESA) and Carolina Sá, from the Portuguese Space Agency. Innovation will be the primary factor of consideration, as well as the technical and scientific soundness of the proposals.

Applications must be submitted by 4 October 2020, 23h59 (CET). The best proposals will be invited to present their ideas during the 2020 Web Summit Edition, which runs from 2-4 December. The winner(s) will also be announced during this same event.

Additional information about the competition can be found on AI Moonshot Challenge or through the email address created for this purpose.