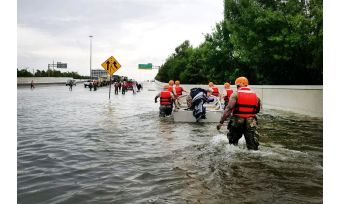 Two crowdsourced mapping projects have been launched in the aftermath of Hurricane Harvey in the USA. Marine Weather and Climate and Tailwind Labs have launched the U-Flood project enabling citizens to register and monitor the flooded streets in their local area. In another crowdsourced mapping project, people in need can register their location on a map to help rescuers come to their aid.

U-Flood is a free near-real-time flood mapping service covering multiple cities affected by Hurricane Harvey, including Houston, Galveston, Baton Rouge and New Orleans. The service was launched on the morning of Tuesday 29 August, and as of 31 August more than 1,500 flooded streets have already been reported on the map. Reactions posted on the U-Flood website already include many examples of people who have been able to warn family and friends about approaching flooding or were able to prepare to evacuate from the area themselves. This crowdsourced real-time mapping service can also benefit aid organisations.

Another crowdsourced mapping project is Houstonharveyrescue.com, which enables people in need to register their location on a map. They are asked to include relevant information (e.g. whether their household includes anyone with a disability) and to provide contact details. A team of voluntary rescuers can then easily identify the neediest cases and respond accordingly.

The rain reported in Houston following Hurricane Harvey is among the most extreme rainfall ever for a major US city and has caused unprecedented and catastrophic flooding in southeastern Texas.

Other examples of how geospatial technology has been used for disaster mapping and management can be found here: