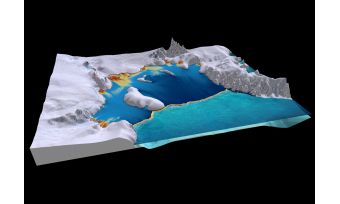 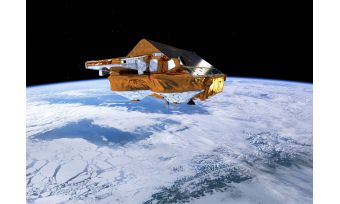 It is now almost ten years since ESA’s CryoSat was launched. Throughout its decade in orbit, this novel satellite, which carries a radar altimeter to measure changes in the height of the world’s ice, has returned a wealth of information about how ice sheets, sea ice and glaciers are responding to climate change. One of the most recent findings from this extraordinary mission shows how it can be used to map movement in the seaward edges of Antarctic ice shelves.

About three-quarters of the Antarctic coastline consists of ice shelves. They are permanent floating extensions of the ice sheet that are connected to and fed by huge ice streams draining the interior ice sheet. Ice shelves form as the ice sheet flows towards the ocean and detaches from the bedrock beneath. The advance or retreat of ice shelves is determined by a balance between mass gain from the flow of ice behind and snowfall on top, and mass loss through ocean melting at the base or iceberg calving at the edge.

Ice shelves are important for the stability of the ice sheet because they act as buttresses, holding back the glaciers that feed them and slowing the flow of land ice into the ocean that contributes to sea-level rise.

However, in recent years warming ocean waters and higher air temperatures are taking their toll on some of the ice shelves, causing them to thin, shrink or even collapse entirely. Therefore, mapping ice-shelf calving front locations is important for understanding and predicting future changes in the stability of the ice sheet.

A paper published recently describes how scientists have developed a novel approach of using CryoSat to generate a unique time series of ice front positions for the Filchner-Ronne ice shelf – the second largest ice shelf in Antarctica.

Jan Wuite, from ENVEO in Austria, said, “The detection of the calving front is based on the premise that the edge of an ice shelf is typically a steep ice cliff, with a drop of tens of metres to the ocean surface or sea-ice cover, which is clearly revealed by CryoSat.

“Applying a new method, called ‘elevation edge’, to CryoSat’s data has revealed that the entire Filchner-Ronne ice shelf advanced by more than 800 sq km per year between 2011 and 2018. The growth of the ice shelf was only interrupted by the calving of a 120 sq km iceberg in 2012 and a few smaller-scale events.”

Eventually, the advancing ice front is expected to break off as part of the natural ice shelf cycle, but these are rather episodic events that only happen every few years or sometimes decades. Many questions still need to be answered as to what is driving these calving events.

Thomas Nagler, also from ENVEO, added, “Combining this new dataset with ice velocities derived from Copernicus Sentinel-1 data allows us to calculate changes in the thickness and area of the ice shelf, as well as the advance rates and iceberg calving rates, emphasising the value of combining data from both satellite missions.”

ESA’s Mark Drinkwater noted, “Understanding how the world’s ice shelves are changing is fundamental to assessing ice sheet stability, and the role of ice shelves in controlling ice-sheet contribution to sea-level rise.”

“Just this week a paper was published in Nature stating that the Greenland ice sheet mass loss closely follows the IPCC high-end climate warming scenario – and the research was based on measurements from a number of different satellites.

“Here, we see how using this innovative elevation edge method with CryoSat data is a welcome addition to standard calving front location detection techniques based on radar and optical satellite imagery. This is great news, as the more information we have the more confident we can be about what’s going on in the far reaches of the polar regions.”

The new method provides calving front locations at regular intervals and can fill existing gaps in time and space. Moreover, it simultaneously provides ice-thickness measurements that are needed to calculate mass changes, and it also has a high degree of automation which removes the need for heavy manual intervention.

Dr Wuite added, “We fully expect that, in the future, altimetry data will deliver a systematic and continuous record of change in ice-shelf calving front positions around Antarctica.

“With CryoSat set to remain in service and the future CRISTAL Copernicus Polar Ice and Snow Topography Altimeter mission – one of the Copernicus high-priority candidate missions – on the table for development, there are certainly excellent opportunities for satellite radar altimetry to deliver valuable new calving front location datasets to monitor the effects of climate change in Antarctica.”