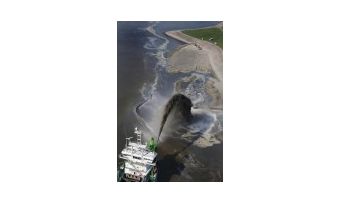 Septentrio, Belgium, has announced that DEME, a world leading group of dredging and land reclamation companies, has selected the TERRASTAR-D Precise Point Positioning service to work with its Septentrio GNSS receivers.

The Belgian dredging and environmental group is exploiting the service using Septentrio AsteRx2eL GNSS positioning and AsteRx2eH GNSS heading receivers to support its nearshore dredging and construction operations worldwide. DEME has evaluated and used the service for several months and selected TERRASTAR-D for its accuracy, stability and consistent performance.

TERRASTAR-D, in combination with Septentrio dual-frequency GNSS receivers, provides a global, seamless, high-accuracy position – often better than 10cm – at high update rates without requiring local base stations, radios or cell coverage. TERRASTAR-D uses both GPS and GLONASS satellites to allow a reliable positioning around the world and a faster convergence in the most demanding user environments.