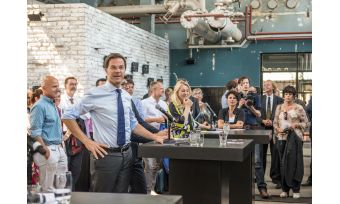 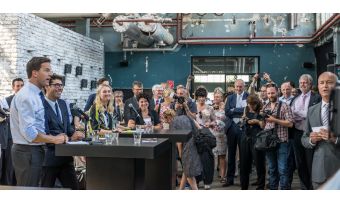 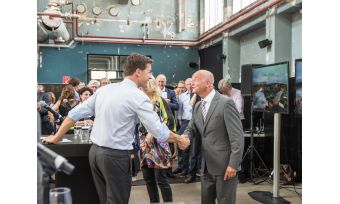 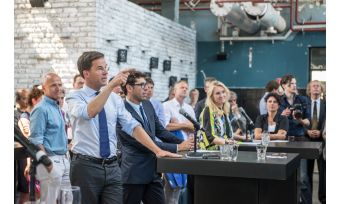 The Dutch Prime Minister Mark Rutte, Minister of Infrastructure and the Environment Melanie Schultz van Haegen, and alderman Boudewijn Revis of BSKB The Hague experimented in a real-life digital urban planning system by Tygron yesterday in the Binckhorst area of The Hague. This interaction marked the start of Tygron’s collaboration with the Dutch government. It was clear that the Tygron Engine led to all parties reaching a consensus, thus underlining its role as the urban planning tool of the future.

Good initiatives by civilians and business owners are not always easy to implement because of the 32 separate planning laws that will remain in place until 2018. Tygron’s values go hand in hand with the aims of the new environmental law that will merge the existing legislation into one simpler, cheaper and faster mandate. The new law was accepted with a large majority in the Dutch House of Representatives on 1 July. As a result, more people will be able to make changes to their surroundings, vote on ideas, understand and play an active part in their environment.

This was celebrated with a day full of activities with the new law as their theme. Thanks to Tygron’s involvement during the day, politicians in The Hague were able to gain first-hand experience of Tygron’s urban planning tool.

The Binckhorst is one of the areas ripe for development under the new environment law, bringing together commerce, residential properties and industry in one area. How should this be approached? It’s hard to imagine anyone better able to answer to this question. At a new cafe in the centre of the Binckhorst neighbourhood, right next to the Tygron offices, several ministers participated in a session facilitated by Tygron.

The Prime Minister Mark Rutte, Minister of Infrastructure and the Environment Melanie Schultz van Haegen, and alderman Boudewijn Revis of BSKB The Hague arrived at the Caballero factory by boat. They were received by hosts of the cafe, and after a brief tour were ready for a role-playing game centred around the environment law.

In this session the role of initiator was played by Prime Minister Rutte. Minister Schultz represented the residents of the area and alderman Revis participated as the municipality. These three parties each had their own screen on which the various parties could see developments and plans visualised from their own perspectives. In a short session, part of the area was filled in and the participants discussed the area’s function. It was clear that the Tygron Engine led to a shared consensus between all parties.

After a delicious lunch everyone took part in a ‘crash test’ discussion forum. This session was established as a prelude to putting the environment law into practice. The afternoon got underway with talks about the content of the new law, courtesy of Maarten Engelberts and Selma van Velsen of the Ministry of Infrastructure and the Environment. Participants then initiated discussions about the various scenarios visualised in the Tygron Engine. It was possible to go into greater depth in this session and everyone could provide input for applying the new law, based on their own expertise.

The following four roles were represented in the example case: the housing corporation, the municipality, the residents and the project developer. In groups of 10 participants, sides were chosen representing the various views on the case in question. After first discussing the issues within each group, the groups came together to take part in a plenary discussion on how to reach a consensus. This immediately provided insight into the key aspects of the case, and it was great to see that those aspects where exactly the ones that the ministry intends to focus on. Especially the ‘why’ (why should this be permitted) and the ‘how’ (how can this be made a reality) questions required further thought. The results of this session will serve as input for a report that is being prepared on the application of the new environment law. Hence, the participants in this session directly contributed to the implementation of the new law.

The August issue of GIM International will include an article on the Tygron Engine (Serious Gaming - Improving Stakeholders Communication in Urban Development Projects) written by Florian Witsenburg, owner and CEO of Tygron, and Rudolf Koster, software developer at Tygron. The company was founded in 2005 in the Netherlands as a spinoff of the Delft University of Technology.

How Digital Twins Can Help Design Cities of the Future

The Economic Benefits of Geodata in Urban Planning in Sweden