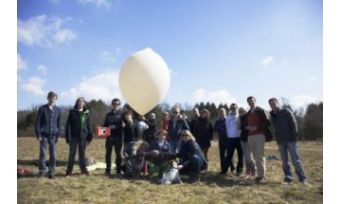 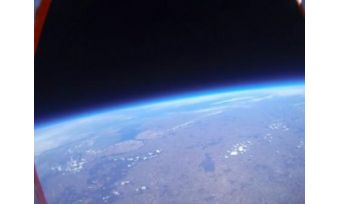 A 16-year-old Dutch schoolboy, Matthijs Tissen, has succeeded in taking photos of the Earth from an altitude of 114,000 feet (35 kilometres) with a camera attached to a weather balloon. All he needed for this was a helium-filled weather balloon, a camera and GPS equipment. He fixed the camera to the weather balloon and let it fly above the Earth for two and a half hours.

Inspired by the images taken from the International Space Station (ISS) by Dutch astronaut André Kuipers, Matthijs Tissen decided to take aerial photos of The Netherlands himself and went in search of sponsors to fund the project. On Sunday, 7 April, the project called 'Flight Level 1200' finally became a reality, but only after a great deal of preparation and waiting for the ideal weather conditions. The balloon rose to a height of 114,000 feet (35km), in “near space” as it is officially known.

In order to make sure that his project would actually yield photos, Tissen used a GoPro-camera with an underwater housing which insulates the camera at temperatures of -60° Celsius. Tissen switched on the camera, which functions independently, just before the launch. It took photos every two seconds, amounting to a total of 6,000 shots – 25MB of visual material.

The weather balloon, with a camera in a home-built box, was launched in the Dutch city of Hilversum – known as the media capital of The Netherlands – and it landed safely on Earth two and a half hours later. And then the search began. The schoolboy used a GPS tracker which transmitted its coordinates to a website. The first report came through successfully, but after that it remained quiet for a long time. Two hours and many fresh attempts later, he was about to give up when he finally received a GPS signal. The camera had landed in a field near Arnhem, close to the border between The Netherlands and Germany.

Tissen thought he was in luck, but that soon changed. When he got in the car with his father to drive from Hilversum to Arnhem, the navigation system broke down. They had to study an “old-fashioned” map at the side of the road to see where they had to go, said Tissen. Mobile internet did not work either due to insufficient network coverage in the border area. In the end, they went to a fast-food restaurant to check the GPS coordinates again on a tablet.

To his surprise, Tissen saw that the camera had suddenly started moving again after lying still for half an hour and that it was now lying on a road. As

he had written his mobile telephone number clearly on the box, he thought that someone would ring him straight away when it had been found, but unfortunately this was not the case. In the end, the website indicated that the camera was lying somewhere in the German town of Heiden.

Following a long search, it appeared that a German couple had found the camera and taken it with them. Eventually Tissen was able to pick it up there. He posted the results of his adventure on his website, which showed beautiful images of The Netherlands from an altitude of 35 kilometres. The Earth and the pitch-blackness of space were easily identifiable. It was possible to recognise the Dutch province of Flevoland and there were even photos of Scandinavia.

When asked if he was already thinking about a new project, he replied that he would like to go up into space himself. Since that possibility seemed unlikely for the time being, he embarked on his 'Flight Level 1200' project - but should there be a space travel project requiring people to join a flight, Tissen would be pleased to be invited, he said.

For more photos, visit the website of Matthijs Tissen.