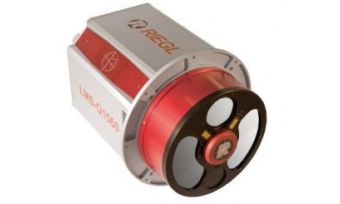 Riegl designed the dual-channel LMS-Q1560 with integrated medium-format camera for a variety of airborne mapping projects with an emphasis on wide-swath coverage. With a 58-degree field of view, the laser can be operated at a maximum pulse repetition rate of 800kHz capable of measuring 530,000 points per second on the ground from an altitude up to 15,500 feet AGL.

The Riegl LMS-Q1560 is the most cost-competitive airborne laser scanner on the market today, said Hume. The system enables flying at a higher altitude and collect a denser spacing of elevation data than any other Lidar system out there, he added.

In addition, the Riegl LMS-Q1560 is equipped with forward- and-look capability which, when combined with its wide field of view, enables the device to capture data from multiple angles effectively and accurately at an extremely high point density. The sensor also utilises Multiple-Time-Around processing, echo digitisation and waveform analysis to simultaneously track more than 10 pulses in the air. This means the Lidar can collect tightly spaced elevation points even in complex environments. Examples are built-up city centres with a variety of buildings and vertical structures as well as extremely rugged mountain terrain where elevations change dramatically and abruptly.

Over nearly three decades, Eagle Mapping has built its reputation on finding more accurate and affordable mapping technologies. Focusing primarily on the global mining industry, the Vancouver firm was among the first to deploy airborne Lidar technology for mapping. More recently, the Canadian firm configured a high-density, narrow-swath Riegl VQ-580 Lidar with a DiMAC medium-format camera on a single aircraft to simultaneously collect elevation and image data for efficient mapping of pipeline and transmission line corridors.

As the company expands into urban and large-area projects for government clients, it will continue to support its extensive client base in the international mining and corridor mapping markets, said Rodney Cope, vice president of sales and marketing.

Eagle Mapping operates a Cessna 206 and Piper Navajo aircraft currently based in British Columbia. The Navajo carries the new Riegl LMSQ1560, and the other is equipped with the Riegl VQ-580 Lidar and DiMAC digital camera. The firm maintains field offices in Bellingham, Washington, USA, and Medellin, Colombia in South America.