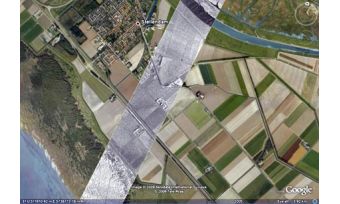 Entrepreneurs at ESA's Business Incubation centre in the Netherlands have used radar technology from the Envisat remote-sensing satellite to develop a compact, high-resolution radar that can monitor land and buildings from small aircraft. The radar can monitor structures such as dams, harbours, canals and buildings, leading to maps for urban planning, territory surveillance and cadastral updating. Several flights over the same location can spot changes between pictures, revealing ground movements that could affect structures.

Because of the compact structure of the system, it can be mounted on very small unmanned aircraft or on single-engine aircraft such as the Cessna 172. This makes it easy to take as many pictures of items or areas on land as necessary, at a much lower cost than traditional surveys. Adriano Meta, inventor of the radar and Director of MetaSensing, the company started to provide the service.

"We developed our high-resolution mapping sensor by integrating the synthetic aperture radar technology developed by ESA and the Technical University in Delft," says Mr Meta. The synthetic aperture radar (SAR) technology developed by ESA for its satellites has considerably advanced the quality of radar imaging. It is now used for various applications, such as providing terrain information to geologists to understand ground movements and help in mineral exploration, imaging oil spills in water to help public agencies intervene at the right time, and mapping ice hazards for navigators. SAR can take 3D pictures through clouds and darkness, which has made it possible for ESA's Envisat and ERS satellites to track changes accurately in the polar ice sheets.

While satellites are ideal for providing information on large regions and remote locations on Earth, more frequent flights and higher resolution could in some cases be an advantage for local areas and structures. The use of a small aircraft makes it much easier to plan the coverage and repeat measurements of an area over time in order to detect changes and identify potential weaknesses in geological and architectural structures. Several flights also make it possible to spot changes of objects on the ground.

"With this system, we can provide a cost-effective service to private companies and public institutions that need accurate mapping, millimetre deformation monitoring, change detection and vegetation classification on a frequent basis," explains Mr Meta. "Because our sensor is simple to use and can work at the speed of a small airplane, we can cover up to 600km2 per hour with a resolution up to the 20cm range," adds Mr Meta.

The MetaSensing system underwent final testing on an aircraft from Rotterdam Airport in March 2009. Testing the system on landscapes with well-known structures was extremely important for verifying the sensor.

"After finalising and testing all algorithms in the laboratory, we verified the performance on industrial structures and buildings. We reached a very high accuracy at an unprecedented spatial resolution, in the order of decimetres, which has never before been commercially available," says Mr Meta. "We are in the process of verifying the upper accuracy limit of our instrument. We expect to reach a level of millimetre deformation accuracy in the very near future."

Once the sensor is operational later this year, the start-up company will look for investment funding and begin the market introduction of its innovative high-resolution, cost-effective mapping and monitoring technology.