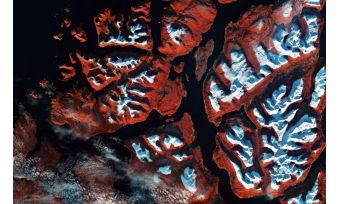 With the Christmas season in full swing, the red and white of this Copernicus Sentinel-2 image bring a festive feel to this week’s image featuring Tromsø – the largest city in northern Norway. This false-colour image was processed in a way that included the near-infrared channel, which makes vegetation appear bright red. The snow over the surrounding mountains is visible in white, adding to the Christmassy feel of the image.

Most of Tromsø, lies on the island of Tromsøya, visible at the top of the image. Owing to its northerly location, the city is a popular area to experience the majestic phenomenon of the aurora borealis, or northern lights.

Tromsø is over 300 km north of the Arctic Circle. During the winter, it’s shrouded in darkness – the Sun sets in late-November and doesn’t rise again until January. The image was captured on 15 October 2019, which means it is one of the last images that Sentinel-2 could acquire before darkness descended.

In September 2019, the German research icebreaker 'Polarstern' left from Tromsø for a mammoth Arctic expedition. The Multidisciplinary drifting Observatory for the Study of Arctic Climate (MOSAiC) expedition involves the icebreaker spending a year drifting in the Arctic sea ice.

Spearheaded by the Alfred Wegener Institute (AWI), MOSAiC is the biggest shipborne polar expedition of all time. The data gathered during the expedition will be used by scientists around the world to study the Arctic as the epicentre of global warming and gain fundamental insights that are key to better understand global climate change.