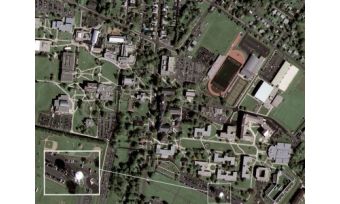 AAMHatch is pleased to announce the release of the very first, 50cm resolution, colour image taken from the GeoEye-1 satellite. This image of an American University campus clearly portrays the academic buildings, parking lots, and athletic fields. The image was collected at 7th October 2008 while GeoEye-1 was moving north to south in a 681km orbit over the eastern seaboard of the U.S.A.

The satellite has been undergoing calibration and testing since it was launched last month. GeoEye-1 simultaneously collects 41cm ground resolution black-and-white imagery in the panchromatic mode and 165cm colour (multispectral mode). This first image showing Kutztown University located in Pennsylvania was produced by fusing the satellite's panchromatic and multispectral data to produce a highquality, true-colour half-metre resolution image. Due to U.S. licensing restrictions, commercial customers will

only access this imagery at a 50cm ground resolution.