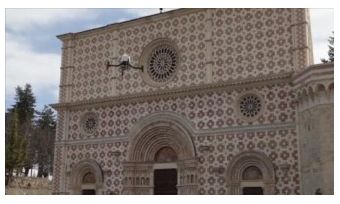 The Anteos RPA of the Italian company Aermatica is the only UAV that has obtained permission to fly in non-segregated airspace from the Italian Civil Aviation Authority (ENAC). As a result, Aermatica and GEOMATICA_LAB from the University of L’Aquila have agreed a collaboration regarding photogrammetric surveys. The first survey was carried out on 4 April 2013 and involved one of the most important churches damaged during the last earthquake: the Basilica di S.M. di Collemaggio in L’Aquila.

The purpose of this first activity was to elaborate on and update the data on the status of this Basilica, which will be used to properly plan any eventual structural interventions whenever needed.

In particular, the aim of this study was to create three-dimensional models of both the building and its roofs using dedicated photogrammetric techniques. All surveyed data will therefore be used to create a database with metric and cartographic qualities. This database will be interrogated using ad-hoc created algorithms and queries under GIS applications in order to disseminate existing data through web-GIS platforms. In addition to integrating optical and thermal sensors, a georeferenced thermal model containing structural information will also be created and divulgated under the same GIS applications.

Therefore a UAV compliant with ENAC regulations can be used in an urban environment for specialised aerial work tasks in Italy for the first time.

The recent technological development of mini-UAV systems opened large new opportunities for both surveyors and other geomatics professionals in the fields of photogrammetry and remote sensing. In the past, in fact, these fields have been generally restricted to only a few companies or government agencies with expensive cutting-edge technical equipment (aircraft, satellites, high-resolution multispectral cameras, etc), and therefore have only interested substantially funded projects.

At the same time, the use of mini-UAVs in geomatics evidenced significant new challenges such as the limited payload, the need for calibration of the non-metric cameras and the automatic flight planning based on Waypoint Navigation Systems.

Moreover, further issues such as the definition of all geometric constraints of the stereoscopic photogrammetry and additional options for the flight, the navigation controls and the management of the on-board sensors have been added to the already complex legal issues related to safety and bureaucracy.