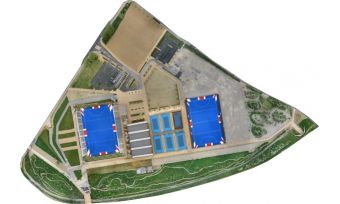 KaarbonTech, a British provider of unmanned aerial surveying, has received special permission from the UK Civil Aviation Authority (CAA) to fly a fixed-wing unmanned aerial vehicle within London airspace. The first flight, commissioned by The GeoInformation Group, took place over Queen Elizabeth Olympic Park, the home of the London 2012 Games.

KaarbonTech selected the senseFly eBee aircraft to carry out the survey. The eBee is proven for ability and speed and carries a high-resolution camera (16Mp) which can capture a photo every 3-4 seconds and means that approximately 1 square kilometre can be captured per flight. The aircraft was airborne on three occasions, each for a maximum of 45 minutes, and during that time captured high-quality imagery of both the velodrome and outdoor cycling zone along with the hockey centre.

The high-resolution imagery collected during the flights was subsequently processed and delivered to the client along with a highly accurate Digital Surface Model made from millions of point measurements compiled from on-board sensors. This data material will be used in both managing the facility and in marketing material.

Mark Entwistle, managing director of KaarbonTech, commented it was a privilege for KaarbonTech to survey a site as iconic as the London Olympic venue and to have their flight plans approved by both the Civil Aviation Authority and London City Airport.