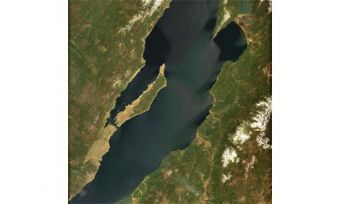 From last June, the ScanEx Research and Development Center takes part in the international project Global Land Survey 2010. The GLS Program is aimed at building global satellite Earth coverage by 2010 and is implemented on the basis of the initiative introduced by NASA and USGS. The satellite coverage will be built on the basis of Landsat 5 and 7 data for the purpose of investigating impacts of human activity as well as natural and climatic changes on Earth.

Possibility of further comparative analysis of multitemporal images will be ensured by data collected over the 36 years of Landsat American Civil Program.

The ScanEx Center is the only Russian company, which participates in the GLS-2010 Project. The Landsat 5 data are fed to the Center's commercial network of receiving complexes in Moscow, Irkutsk and Magadan, visibility zones of which cover the territory of Russia and the adjoining countries.

It's worth noting that the Landsat 5 satellite launched in 1984 set up the absolute record on operational lifetime among Earth surveying spacecraft. It was initially planned that the satellite would operate on orbit for three years. The primary hardware of Landsat 5 is the optical and mechanical scanner -Thematic Map-Maker (TM). It enables survey in the 185km wide swath with spatial resolution of 30 meters in six spectral channels of visible, near and middle sections of infrared (IR) spectrum and 120 meters in long-wave section of IR spectrum.

In general the Landsat program is the most lasting and one of the most successful of all Earth space imagery programs. Despite introduction of new spacecraft and sensors the Landsat satellites remain unsurpassed in their class from the standpoint of combination of basic parameters: scene width, spatial, temporal and spectral resolution. Besides, initially the Landsat data spread world-wide due to the democratic pricing and licensing policy. Starting 2009 the entire imagery archive of the Landsat series satellites operates in the mode of free on-line access. In turn the space information within the framework of the GLS-2010 project will be provided free of charge with minimum time delay after surveying.