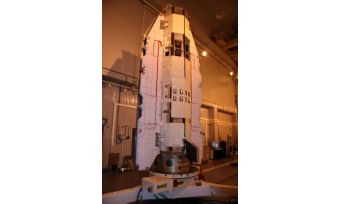 The European Space Agency is about to launch a mission to investigate the Earth's gravitational field and to map the reference shape of our planet - the geoid - with exceptional resolution and accuracy. The Gravity field and steady-state Ocean Circulation Explorer (GOCE) will be placed onto a low altitude near sun-synchronous orbit by a Russian Rockot vehicle launched from the Plesetsk Cosmodrome in Nothern Russia, some 800 km north of Moscow. Lift-off is scheduled to take place at 16:21 CEST (14:21 UTC) on 10th September.

The launcher is operated by Eurockot Launch Services, a joint venture between EADS Astrium and the Khrunichev Space Centre (Russia). ESA's 1-tonne spacecraft carries a set of six state-of-the-art high-sensitivity accelerometers to measure the components of the gravity field along all three axes. The data collected will provide a high-resolution map of the geoid (the reference surface of the planet) and of gravitational anomalies. Numerous applications are expected in climatology, oceanography and geophysics, as well as for geodetic and positioning activities.

To make this mission possible, ESA, its industrial partners (45 European companies led by Thales Alenia Space) and the science community had to overcome an impressive technical challenge by designing a satellite that will orbit the Earth close enough to gather high-accuracy gravitational data while being able to filter out disturbances caused by the remaining traces of the atmosphere in low Earth orbit (at an altitude of only 260 km). This resulted in a slender 5-m-long arrowhead shape for aerodynamics with low power ion thrusters to compensate for the atmospheric drag.

GOCE is the first Core Mission of the Earth Explorer programme undertaken by ESA in 1999 to foster research on the Earth's atmosphere, biosphere, hydrosphere, cryosphere and interior, on their interactions and on the impact of human activities on these natural processes. It will be the first in a whole series of Earth Explorer missions with five launches to take place within the next two years.