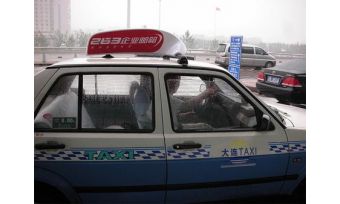 China TransInfo Technology's subsidiary Dajian Zhitong Information Servic has entered into a cooperative agreement with the Dalian Branch of China Mobile to jointly invest in the installation of in-taxi LED GPS security surveillance devices on 6,000 taxis in Dalian. Prior to this partnership with China Mobile, China TransInfo acquired 85% ownership of Dajian Zhitong in September 2008.

Dajian Zhitong is a leading taxi media operator in Dalian, Liaoning province. Dajian Zhitong holds exclusive rights to sell advertisement space on taxi rooftops and administer real-time GPS data activities including a GPS-based taxi call center, a GPS- based real time taxi alarm system, and a GPS-based taxi driver navigation system for about 10,000 taxis in Dalian for a period of 10 years, starting from August 2008. China Mobile is currently the largest mobile telecom operator in the world in terms of network coverage and subscriber base.

According to the agreement between China TransInfo and China Mobile, China Mobile will invest up to USD1.6 million to install GPS location application systems in 6,000 taxis in Dalian before the end of March 2009. Upon the successful launch of the system, Dajian Zhitong will operate the new system and develop commercial applications on it independently. Dajian Zhitong has also committed to payback the investment to China Mobile on monthly basis without interests in three years of the launch of the system. The ownership of the GPS location application system will be transferred to Dajian Zhitong after the completion of the repayment.

'This partnership with China Mobile, one of the leading telecom operators in the world, has further strengthened China TransInfo's brand recognition and market position in the taxi media business,' commented Mr. Shudong Xia, CEO of China TransInfo Technology Corporation. 'Through joint efforts with China Mobile, we will be able to more accurately collect real time traffic data as well as improve taxi security management in Dalian while displaying advertisements on a uniform platform.'