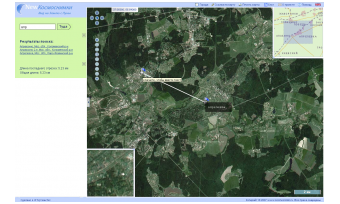 A new site has been launched as the first stage of the project to create satellite-based imagery database covering the entire Russian territory.

These images can be viewed as a photographically precise and updated map with different scales: from large territories to separate streets and buildings. Moscow and Moscow Regions mosaicks have already been created.

In future the area cover with space images will be increased, first by including St-Petersburg and Leningrad Region, then European part of Russia and later on of the entire territory.

An increased resolution up to 1m will be available to see with respect to towns (currently 6m resolution images are presented).

At the next stage the internet-shop section will be added where one could order images by selecting the required fragment on the map and by getting it as a jpeg-file with map fragment and georeference files or as printed posters.

The developers plan to extend the New.Kosmosnimki geo-portal functionality by adding different social services to allow the users to introduce and edit the inputs themselves: to lay routes, add photos and GPS-tracks on the map, etc. The services to lay out itinerary points, to measure distances and square areas, as well as to search for towns by their names, are already available on the site.

The basic difference of the New.Kosmosnimki project from its equivalents is in using of more detailed and updated image of the Russian territory.

New.Kosmosnimki site has a blog (http://blog.kosmosnimki.ru/), where one could leave comments and improvement proposals for the new web service.