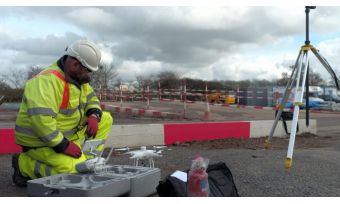 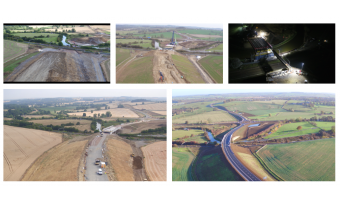 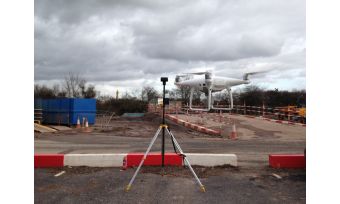 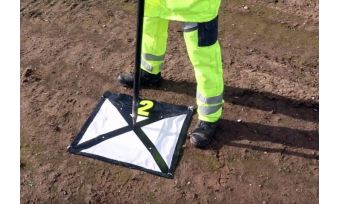 Balfour Beatty has turned to drone expert Heliguy as its preferred supplier, with the award-winning northeast England-based UAV firm providing a comprehensive package of equipment and support. Balfour Beatty’s drone pilots have praised Heliguy for its industry-recognized expertise, effective communication and wide-ranging services.

Recently, Heliguy visited Balfour Beatty on location in the Midlands to find out how the innovative company is benefiting from drone technology, both on its M6 Smart Motorway scheme and on other construction and infrastructure projects.

Balfour Beatty’s experienced drone pilots Craig Matthews and Wayne Hughes have also shared their verdicts on the Phantom 4 RTK, which they have been trialling during the M6 work. So far, they are pleased with its performance and the results it yields.

In 2015, Balfour Beatty – in partnership with VINCI Construction – was selected to deliver a Smart Motorway package on the M4, M5 and M6, worth up to £607.4million. Among the projects was a 13.6-mile section of the M6, from Junction 2 at Coventry to Junction 4 near Coleshill, at a cost of £212million.

Once the two-year upgrade work is completed, the transformed stretch will increase capacity, reduce congestion and shorten journey times for the thousands of road users who use this network every day.

Extra capacity will be added to the motorways through the conversion of the hard shoulder to a permanent running lane. Electronic signs, operated by a regional control centre, will be installed to manage the flow of traffic in response to driving conditions. And for Balfour Beatty, drones are playing an important role with this major M6 transformation.

UAVs helping with safety and efficiency

Balfour Beatty is using a number of DJI drones – as supplied by Heliguy – on the M6 scheme. These are the Phantom 4 RTK, Mavic Pro and the Inspire 1 with X5 camera.

Balfour Beatty has used the drones for a number of reasons, including mapping and capturing aerial shots, and the company has found that this technology has reduced the amount of hours spent on site, as well as numerous other benefits.

First off, they are proving to be a real time saver, especially when it comes to measuring stockpiles and earthworks at the scheme’s recycling depot at Junction 2. Thanks to UAVs, the team can fly over the site and digitize the area in a fraction of the time that it would take to use traditional, on-site methods. This leads to faster data collection and increased efficiency.

Craig Matthews, principal UAS manager for Balfour Beatty, said: "The drones are a great time saver. Take the recycling compound for example. If we were to measure stockpiles with traditional survey tools, it would take a lot longer to measure the site and gather the data, whereas drones enable the team to do fairly rapid measurements of different types of materials and earthworks. It would take a surveyor, using traditional handheld equipment, about a day to measure the stockpiles and process the data. But using the drone, we can fly over the compound in 15 minutes and process the model in about two hours.”

The ease in which this can be done is staggering. In the video below, Craig Matthews shows just how quick and simple it is to measure stockpiles using drone technology and computer software.

Not only does this method increase efficiency, but it also dramatically improves safety – which Balfour Beatty describes as a big plus.

Wayne Hughes said: “Drones make it safer to gain these quantities. To put it simply, drones help unbelievably with health and safety, taking people out of dangerous situations. They are fantastic tools, supplementing the work of the surveyors on-site and helping us to get out to places where boots on the ground wouldn’t necessarily be the best option.”

“It takes people away from places where they could be in harm’s way and it means that we haven’t got people climbing over stockpiles. Instead, the drones can fly over the site and generate a model afterwards, which we can review in the office,” he added.

Drones provide a bird’s-eye view of a construction site, giving a complete snapshot of the area and offering useful insights. Balfour Beatty carries out regular flights across the scheme, allowing the whole team to monitor progress and to support team briefings – as the video below shows.

This is vital for a number of reasons:

Take this sequence of images for example, taken from the Balfour Beatty scheme to construct the A45 Daventry development link road, in Northamptonshire. The pictures show how a drone can be used to monitor and record site progress over a period of time.

With this in mind, it is fair to say that drones give a unique view, which you would not get from the ground. Wayne Hughes: “It is very useful. We can see at a moment’s notice where we are with the project and we can demonstrate that to the customer. It means that the team can be aware of what is going on without having to go out to the site and you can reach areas that you can’t otherwise necessarily get to because of health and safety.”

"Regular footage from the drone provides a video log for the duration of the scheme. It allows us to monitor and review progress and we can refer to a particular time frame anywhere within the life cycle of the project,” Hughes continued. “We get to see the progress as it is happening and there’s no questions – the footage captured from the drones says this is where we were at this stage or that stage, and this is where we are now. This is beneficial for the customer, stakeholders and the staff,” he added.

As part of the scheme, Balfour Beatty has been trialling the Phantom 4 RTK – which was provided by Heliguy. The next-generation mapping drone was released towards the end of last year and was designed to use RTK processing to produce highly accurate aerial maps.

Wayne Hughes, principal UAS Pilot at Balfour Beatty, said: "The RTK is very good. It provides greater flight safety due to the stability it offers and provides more accurate ground-sensor data. We have achieved some very encouraging figures.”

In addition to the RTK unit, the Phantom 4 RTK also uses a redundant GNSS (Global Navigation Satellite System) module that provides additional flight stability when flying in dense regions with poor RTK signal. The RTK module is integrated directly with the drone to provide centimetre-level accuracy for stable flight and accurately georeferenced imagery.

A new TimeSync system was added to continually align the flight controller, camera and RTK module – ensuring each photo uses the most accurate metadata and fixes the positioning data to the centre of the CMOS sensor. The Phantom 4 RTK also has the ability to connect to the D-RTK 2 Mobile Station (pictured below), NTRIP (Network Transport of RTCM via Internet Protocol), or store the satellite observation data to be used for PPK.

Craig Matthews said: “We have found the Phantom 4 RTK to be a great piece of kit and when it is paired with the base station we are achieving a rock-solid, stable flight and nice accurate models. The battery life is exceptional and it produces high-resolution images.”

When it comes to mapping the site, Balfour Beatty has merged the old with the new, complementing the traditional method of laying ground control points with the Phantom 4 RTK to collect the data.

Ground control points – or GCPs as they are known – are marked points on the ground that have a known geographic location. However, laying out a large number of these markers can be time-consuming. But the Phantom 4 RTK changes all of this. Wayne Hughes: “Thanks to the Phantom 4 RTK, less GCPs need to be put out compared to traditional methods. This reduction makes it safer for the staff who normally put them out.”

DJI has recently released DJI Terra – a new mapping software tool which is compatible with the DJI Phantom 4 RTK. To find out more, click here.

The smart motorways project isn’t Balfour Beatty’s first involvement with drones. In fact, with innovation at its core, the company has been using UAVs since 2015 and has 11 pilots in its team. Craig Matthews: “We have had drones in-house for about three years and they have been used for a variety of work, from inspections to monitoring general progress, filming and PR and mapping. Balfour Beatty has always tried to stay ahead of the curve in terms of technology and adopting new technology if we can find a suitable place for it in the business. They are a great tool to deliver the results safely, quickly and accurately.”

Indeed, drones form a large part of the company’s Innovation 2050 vision, which sets out a digital future for the infrastructure industry, based around human-free construction sites.

As part of the innovative strategy, ‘drones will be flying overhead, scanning the site constantly, inspecting the work and using the data collected to predict and solve problems before they arise, sending instructions to robotic cranes and diggers and automated builders with no need for human involvement’.

Looking ahead to the potential for Balfour Beatty to extend its drone provision, Matthews said: “I imagine that Balfour Beatty’s drone programme will keep growing as we find new uses across the business.”

When it comes to drones and innovation, Wayne – who has been flying UAVs for a number of years – says he has been blown away by the rapid development of drones. In the space of a few years, unmanned aircraft have gone from hobbyists toys to major players in the world of cinematography and enterprise.

Wayne Hughes: “I have seen changes that I never thought I would see. You go back to the Inspire 1 and it doesn’t feel like we were there that long ago. But you compare that to the Phantom 4 RTK, and we’ve also used the M210 RTK, which was a dream, and we’ve come so far in such a short space of time.”

Would Craig Matthews and Wayne Hughes encourage other companies to use drones? The answer to this question is an unequivocal yes, with the latter describing drones as a game-changer for the construction industry. Matthews said: “I would recommend any company which is considering using drones in the business to at least explore it. The cost of the equipment is falling, but the quality of the equipment is increasing. It is a no-brainer and I believe that drones will become commonplace on construction sites.”

From saving time in the field, to improving safety and providing valuable information from above – it is clear that the use of drones, including the DJI Phantom 4 RTK, is transforming the way that Balfour Beatty works.

The benefits of using UAVs in construction are plain to see and it would appear that this industry will utilise drones more and more in the future. Indeed, the release of the Phantom 4 RTK and more recently the mapping software, DJI Terra, shows that DJI recognizes the potential of these mighty machines when it comes to construction and surveying.

There’s every chance that additional mapping drones and tools will be added to the DJI ecosystem in the coming months and years. After all, in the words of Balfour Beatty UAV pilot Wayne Hughes, drones have been a game-changer for the construction industry.