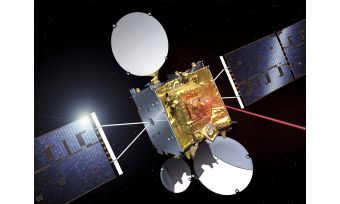 The most sophisticated laser communication network ever designed – according to ESA – has gained its second satellite. The European Data Relay System (EDRS) was built to accelerate the flow of information from Earth-observation satellites to people on the ground. The second satellite in the network, EDRS-C, has now passed its user commissioning review and entered into full service.

Launched on 6 August 2019, EDRS-C is in geostationary orbit some 36,000 kilometres above Earth. This geostationary position enables the communication satellite to maintain an almost constant connection with Earth-observation (EO) satellites that are closer to the planet’s surface and circle the Earth every 90 minutes or so.

The EDRS satellites use lasers to communicate with EO satellites and beam their data back to Europe in almost real time. Without them, there would be delays of up to 90 minutes.

EDRS-C has joined its sister satellite, EDRS-A, and can now be used by its customers to relay information from all four Sentinel satellites that watch over Earth, capturing day-and-night radar images and multispectral high-resolution images of vegetation, soil and water cover, inland waterways and coastal areas – as well as information for emergency services. The Sentinel satellites form part of the EU’s Copernicus programme.

EDRS is a new, independent European satellite system, and is a Partnership Project between ESA and operator Airbus as part of ESA’s efforts to federate industry around large-scale programmes, stimulating technology developments to achieve economic benefits.

The EDRS-C satellite platform was built by OHB System in Germany and the laser terminals were developed by Tesat-Spacecom and the DLR German Space Administration.