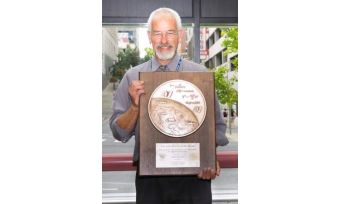 The Institute of Navigation’s (ION) Satellite Division awarded Karl Kovach its Johannes Kepler Award on 20 September 2012 at the ION GNSS Conference (Nashville, TN, USA) for his contributions to the development of the Navstar Global Positioning System Satellites, Operations, Signals, Receivers and Standards.

Karl Kovach is a senior project leader with The Aerospace Corporation, supporting the Systems Engineering branch of the Global Positioning Systems Directorate. Kovach began his involvement with GPS as an Air Force Lieutenant in 1978; and over his Air Force career developed requirements and specifications for the first generation of military GPS receivers, standardised interfaces among diverse GPS platforms, and conducted flight test of Phase I and Phase II military GPS receivers. Captain Kovach then served as commander of the GPS Control Segment at Vandenberg Air Force Base, first managing the build-up of the initial Block I GPS constellation, establishing routine operating procedures including sending the very first Notice Advisory to Navstar Users (NANU), and subsequently leading the transition of GPS operations from Vandenberg to its present location at Schriever Air Force Base in Colorado Springs.

Following his Air Force service, Kovach joined ARINC, where he focused on GPS receiver standards, Receiver Autonomous Integrity Monitoring (RAIM) algorithms, certification of military aviation receivers, Wide Area GPS Enhancement (WAGE), GPS signal development, and GPS performance standards. In 2007, Karl joined The Aerospace Corporation directly supporting the Systems Engineering Division of the GPS Directorate. In this capacity he has focused on the integrity of the current operational system, while working to improve integrity in the new modernised space and control segments and to finish modernisation efforts for the GPS navigation signals.

Kovach has been a member of the Institute of Navigation (ION) since 1985.  He has over two dozen ION publications and was the recipient of the ION Capt P.V.H. Weems Award in 2003. Karl holds a BSc in Mechanical Engineering from the University of California Los Angeles. However, perhaps his proudest accomplishment is as a father to his young daughter Karlie, who he credits as one of his primary inspirations.