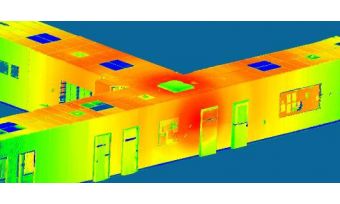 Geomatics engineering is an emerging technology discipline that specialises in acquiring, processing, modelling, analysing, and managing geospatial information. The Geomatics Engineering Department from the University of Calgary in Canada has recently developed a mobile terrestrial system that can capture dense 3D point clouds of indoor environments.

Google Maps and GNSS (Global Navigation Satellite System) together have revolutionised the way we live and travel. Maps are a fundamental component of personal navigation devices. Conventionally these maps are built by means of surveying, but indoor environments such as offices, museums, and airports can be very time consuming to survey due to occlusions. In theory a mobile system can reduce the amount of time surveyors spend in the field, thus reducing the project cost. However, they usually depend on the availability of GNSS and in situations where the satellite signals are obstructed a reliable, accurate, and cost-effective solution has yet to emerge. In this project sponsored by the Natural Science and Engineering Research Council of Canada, Alberta Innovates, the Canada Foundation for Innovation, the Killam Trust, the Imaging Metrology Group and Precise Engineering and Deformation Surveys Group designed an indoor mobile mapping system that does not rely on satellite positioning or artificial markers.

Their proposed mobile mapping system, the Scannect, uses state-of-the-art photogrammetric bundle adjustment techniques to perform Simultaneous Localization and Mapping (SLAM). The Scannect consists of two triangulation-based 3D cameras (i.e. Microsoft Kinect), a survey-grade Lidar system (i.e. FARO Focus3D), and an Xsens MTi 10-series. The pose of the Scannect is continuously estimated using all onboard sensor while the depth camera and Lidar are responsible for capturing detailed point clouds. In kinematic mode it can acquire up to 18.4 million points per second and it stop-and-go mode it has a maximum unambiguous range of 130m with a 305°/360° vertical/horizontal field of view.

Dr Jacky C.K. Chow, the designer of Scannect, explained: 2D and 3D optical imaging modalities can give a vast amount of information when exploring an unknown environment. Not only can they mimic the functionalities of our human vision, in certain aspects modern optical technologies have already surpassed humans; for example Lidar can give us geometrically correct distances at the millimetre-level in the absence of ambient light. However, vision systems are not foolproof and that is why Scannect chose the Xsens MTi-30 to provide their system with additional senses. The MTi-30 can strengthen the vision only solution, bridge the gaps when camera tracking fails, and can help resolve ambiguities caused by repetitive patterns in the scene.

The image shows a 3D reconstruction of the interior of a typical hallway at the University of Calgary. Zoomed-in view of the point cloud measured by the Scannect system.