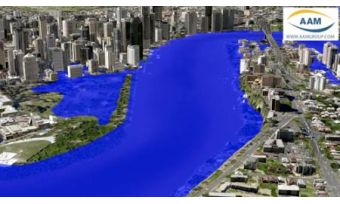 AAM's 3D Flood Simulation of Brisbane, Australia, was used extensively by Australian and Global media during the recent flood crisis in Brisbane. The flood level simulations were produced interactively in 3D. This was a very effective way of communicating the impact of the flood on buildings and infrastructure and it provided a valuable tool in assessing the potential risk for the city in the days leading up to and during the flood peak.

The videos supplied residents, business owners and the public with realistic representations of the predicted flood event.

The flood simulation was based on accurate geospatial terrain data created by AAM. The company provides engineers and planners with photo realistic 3D city models and highly accurate terrain models to aid in their assessment and design tasks.

AAM general manager, Brian Nicholls, says that he hopes that AAM's simulations help in some way to communicate the scale and extent of the flooding. "We hope that the recent events in Queensland will prompt greater consideration to be given to high-resolution mapping, which can then be used to help manage future flood events in many areas of Australia at risk."