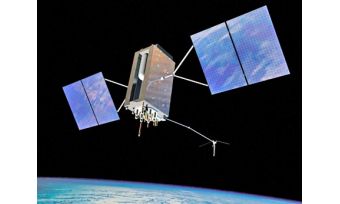 A U.S. Air Force/Lockheed Martin team is gearing up to launch a modernised Global Positioning System Block IIR (GPS IIR-M) satellite, which includes a demonstration payload that will transmit a new third civil signal, known as L5. This spacecraft is set for launch aboard a Delta II rocket on 24 March 2009, from Cape Canaveral Air Force Station (FL, USA).

The L5 demonstration payload will comply with international radio frequency spectrum requirements and pave the way for future generations of GPS spacecraft that will include an operational third civil signal to improve the accuracy and performance capabilities of the system.

The satellite, designated GPS IIR-20(M), is the seventh in a line of eight IIR satellites that the Lockheed Martin-led team modernised for the Global Positioning Systems Wing, Space and Missile Systems Center, Los Angeles Air Force Base (CA, USA). The design, development and integration of the L5 demonstration payload, and subsequent delivery of the space vehicle was completed one month ahead of schedule and in less than one year after the Air Force awarded Lockheed Martin a USD6-million contract for the work.

Each IIR-M satellite includes a modernised antenna panel that provides increased signal power to receivers on the ground, two new military signals for improved accuracy, enhanced encryption and anti-jamming capabilities for the military, and a second civil signal that will provide users with an open access signal on a different frequency.

The GPS constellation provides critical situational awareness and precision weapon guidance for the military and supports a wide range of civil, scientific and commercial functions - from air traffic control to the Internet - with precision location and timing information. Air Force Space Command's 2nd Space Operations Squadron (2SOPS), based at Schriever Air Force Base (CO, USA) manages and operates the GPS constellation for both civil and military users.

The launch was successful, see the update