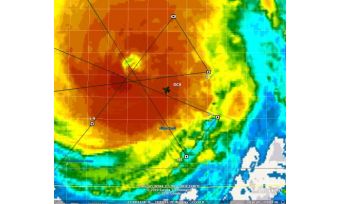 The path and intensity of Hurricane Earl off the east coast of the United States were tracked by all three of NASA's environmental science aircraft involved in the aerospace agency's Genesis and Rapid Intensification Processes (GRIP) hurricane research campaign.

NASA's DC-8 flying laboratory, based at the Dryden Aircraft Operations Facility in Palmdale, CA, went aloft from its field deployment site at Ft. Lauderdale, FL, at mid-day Wednesday to overfly the hurricane. Scientists aboard the converted jetliner worked with a variety of instruments to characterise the powerful storm system, and the DC-8's flight path took it directly over the eye of the hurricane several times. In-flight reports indicated that all of the specialized instruments were functioning properly during the flight.

Meanwhile, remotely operated high-altitude Global Hawk was being prepared Wednesday for a 24-hour mission over Hurricane Earl. It was scheduled to depart from NASA's Dryden Flight Research Center at Edwards, CA, about 9PM Wednesday evening and after a cross-country transit, fly repeated patterns over the hurricane for at least eight hours while its suite of instruments monitored the storm's progression and characteristics.

The Global Hawk flew a prior 15-hour flight over Tropical Storm Frank in the eastern Pacific Ocean southwest of Baja California last Saturday as part of the GRIP campaign. The DC-8 flying laboratory had flown two previous flights over Hurricane Earl from Ft. Lauderdale and from St. Croix, U.S. Virgin Islands over the past week.

The flights by the NASA science aircraft are in close support of operations being flown by NOAA aircraft that are also involved in the six-week GRIP campaign.