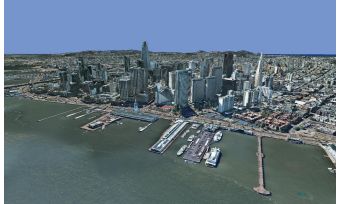 Nearmap, an aerial imagery company, has launched a 3D product in a move that could potentially change the way industries such as urban planning, architecture, construction, government and councils view and shape cities across Australia and the USA. More than 400,000 km2 have already been covered. Nearmap 3D allows customers to stream and export 3D imagery on demand on a massive scale, through its proprietary MapBrowser web application. Additionally, because the imagery is updated frequently, businesses can work with the most current information to make better-informed decisions.

Nearmap has developed AI technology that is turning millions of aerial images, captured over a decade, multiple times a year, into valuable datasets. These datasets can be used to more accurately and efficiently measure change and quantify attributes, such as solar panels, pools, roofs or construction sites. Organizations ranging from small businesses to large companies and cities will be able to take advantage of AI-driven location intelligence.

“Accessing 3D imagery up to now has typically been an arduous, time-consuming and expensive process - but not anymore. This represents the single largest, most frequently updated footprint of 3D accessible through a browser. The ability to measure in 3D space, size up an area and then export Nearmap 3D for use in other platforms will transform the aerial imagery market.” said Tony Agresta, executive vice president of product at Nearmap. “The AI technology that we’re working on will allow organizations to identify locations with specific attributes and in so doing, reduce site visits, generate more leads, and eliminate the time involved to inspect properties manually.”

Nearmap is making 3D imagery accessible to anyone, in the same way it has with 2D. While Nearmap has offered 3D imagery since 2017, this new iteration of the technology allows users to instantly stream 3D content at massive scale via its MapBrowser web application.

The lightweight platform offers customers a fully immersive 3D experience, allowing them to visualize cities in 3D from any direction, measure distances, and immediately export a custom area in a variety of 3D formats at high speeds.

“MapBrowser allows users to easily and instantly stream this content with many export options. Now users can visualize, measure, define a custom area, export our 3D and use it in their workflows with other commercial platforms and tools. We're helping 3D experts and novices alike access reality like never before, and this is an important next step in our Reality as a Service journey.” said Dr Tom Celinski, executive vice president of Technology & Engineering at Nearmap.

“We live in a 3D world, we think in 3D, and so we have to ensure that our products give the closest representation of reality as possible,” Celinski said. “That means businesses that rely on visualizing 3D content can now access up-to-date 3D models instantly and export them in just minutes. In a tender process, for example, that can be the difference between winning a new project or not.”

Nearmap AI technology is the result of more than two years’ worth of research and development, and a team of close to 20 data scientists and machine learning engineers. The team, led by Dr Michael Bewley, is using the petabytes of imagery that the business has captured over the past 10 years and turning it into a living dataset to accurately identify changes or quantify attributes from the Nearmap library of aerial imagery.

Nearmap has built highly accurate machine learning models and deployed them on a massive scale. The automated process, and the constantly learning engine, means that the AI technology can be applied to any new geography. Nearmap also applies the models to new surveys, generating fresh results with current imagery.

To date, Nearmap has performed analysis on over 1 million square kilometres of imagery across Australia and the USA (which constitutes about 80 million properties). Nearmap is now inviting customers to take part in a beta programme to experiment with various use cases.