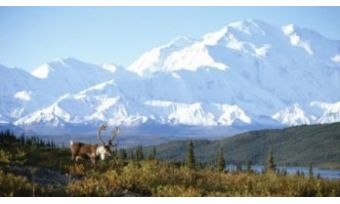 Lt. Governor Mead Treadwell of Alaska, USA, has told a gathering of map collectors in the state capital of Fairbanks that Mount McKinley may be even shorter than cartographers thought, according to new digital elevation map data collected by the State of Alaska and multiple federal agencies working in collaboration. During a symposium of the International Map Collectors’ Society, Treadwell referenced orthometric survey data that recorded Mt. McKinley as stand at 6,168 metres as opposed to 6,194 metres as originally believed.

Although that is 26 metres shorter than was thought, Mt. McKinley remains the tallest peak of North America. The mountain’s elevation was originally measured to stand 6,194 metres in 1952, based on photogrammetry. A 1989 field survey recorded an elevation of 6,189 metres – 5 metres shorter than the 1952 recording.

The 2012 revision of 6,168 metres was recorded with radar technology deployed as a result of Alaska’s Statewide Digital Mapping Initiative (SDMI), which also revealed that an entire ridgeline of Mt. Dickey in Denali National Park was missing from previous maps – one of many discrepancies corrected by recent map updates.

The State of Alaska has invested USD9.59 million in SDMI since 2010, and the federal government has invested USD14 million toward the overall cost of creating a digital elevation model for Alaska. The initiative, nearly 50% complete, is on schedule for state-wide completion by 2016.

Alaska’s maps are nearly 50 years old and have never met National Map Accuracy Standards, Treadwell explained. The combined effort of multiple federal partners and the State of Alaska to get Alaska mapped is making great progress.

Treadwell, along with Anne Castle, assistant secretary for Water and Science at the U.S. Department of Interior, has helped convene the Alaska Mapping Executive Committee to bring federal and state mapping efforts together. He said one goal of new maps is safer aviation in Alaska.