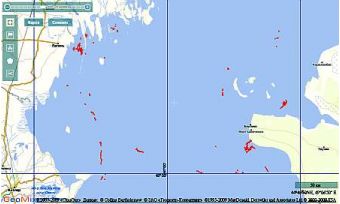 Between August and November 2009 as requested by Lukoil-Nizhnevolzhskneft, ScanEx Research and Development Center completed the project for satellite monitoring of oil pollution in the North Caspian region. The project goal was to detect pollution on the surface of the North Caspian with petroleum products and identify possible pollution sources within the period of sea ice-resistant fixed platform installation in the Yuri Korchagin oil field.

The domestic network-based technology of multi-satellite monitoring ScanNet developed by ScanEx RDC was applied to ensure high probability of oil pollution detection and cause identification. The primary technology components were as follows:

- high acquisition frequency (1 session per 2 days in average) achieved through the use of two satellites with onboard radar sensors RADARSAT-1 (Canada) and ENVISAT-1 (European Space Agency);

- arrangement of direct reception of satellite images in Russia and their computerized processing in near real time mode;

- prompt product delivery to the requestor via the web-service.

To ensure high operability, the Moscow Office of ScanEx RDC arranged round-the-clock cycle of radar imagery reception and processing. Satellite information after thematic processing in near-real time mode was delivered to specialists of Lukoil-Nizhnevolzhskneft via Lukoil-Kosmosnimki web-service, which is based on the local GeoMixer web-technology.

From 1st August to 30th November, 64 sessions were completed for operational satellite imagery of the North Caspian (average revisit period being less than 48 hours), which resulted in receiving and processing 45 images of RADARSAT-1 (spatial resolution of 50m) and 19 images of ENVISAT-1 (150m). The map shows integrated spatial distribution map of sea slick and surfactant pollution detected using RADARSAT-1 and ENVISAT-1 satellites from August through November 2009.

To ensure high frequency of the North Caspian offshore monitoring the project utilised optical multi-spectral images from Terra and Aqua, Landsat-5 (USA) and high detail imagery of EROS-A/B (Israel). In particular Landsat-5 data were used for nature identification of certain slicks and for validation of oil slick presence in the radar images.

Oil slicks of anthropogenic nature were delineated in seventeen radar images. Oil pollution within the license areas of LUKOIL-Nizhnevolzhskneft was not detected in the entire monitoring period.

The main portion of the detected pollution occurred due to ship dumping of polluted water and petroleum products, due to the distinctive shape and location near traffic routes. The acreage of largest spills constituted 2-3 square km. Some satellite images also detected ships involved in pollution.

Based on the geospatial distribution analysis of detected oil pollution of sea surface the most polluted area is the Astrakhan sea anchorage, which is connected by traffic routes with the Caspian basin seaports. Significant pollution level was detected along the traffic routes around the Tyub-Karagan Peninsula connecting Kazakhstan ports with the Astrakhan sea anchorage and Makhachkala as well as those running around the Tuyleni Island in the Kazakhstan sector.

In conjunction with the satellite images the monitoring of the North Caspian utilized oil slick motion models and data of automated identification of ships - AIS, supplied from Tranzas Company in the test mode.

Calculation of stable oil pollution transfer in the process of monitoring utilized OilMARS (Oil Spill Model for the Arctic Seas), developed in AARI. The model takes into account transfer and transformation of oil pollution on the sea surface occurred through emergency oil spills from fixed and moving sources, as well as distribution of oil pollution slicks detected on the sea surface. The model was preliminary adapted to the Caspian Sea water area and the reference analysis grid was generated.

Verification of the OilMARS model in the Caspian Sea was achieved through the use of satellite image pairs of the one and the same oil slick obtained in the course of the monitoring within 8-12 hour timeframe.

In the framework of the project assessment of the environmental condition of the North Caspian surface involved daily generation of three product types resulting from processing of images acquired by MODIS spectroradiometers onboard Terra and Aqua (USA) satellites: maps of chlorophyll-a concentration, suspended matter and sea surface temperature.

Generally in the Russian sector of the Caspian stable environmental situation was observed in the process of the satellite monitoring and no significant deviations from average long-term values were noticed. Presence of biogenic films of surfactants and petroleum product spills detected by satellite imagery was representative for the estuary area of the Volga and along ship traffic routes respectively. However it didn't significantly impact the ecosystem condition. Export of slick pollution by river runoff was not observed within the monitoring period.