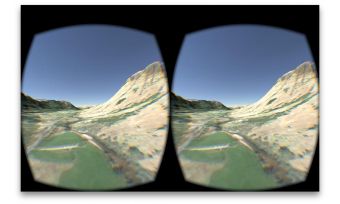 The spectacular setting of Ben Nevis provides the backdrop for an Oculus Rift game created by Ordnance Survey (OS) developers, in which players race against the clock to find a hidden trig pillar. The recreation of Britain’s highest mountain has been constructed by OS in 1:4 scale using OS data and covers an area of 10km x 10km. Britain’s mapping agency, with a 224-year history of collecting and using data in imaginative and useful ways, has also released a virtual reality (VR) tour of the same rugged Ben Nevis mountainscape that is featured in OS’s Oculus Rift game. The virtual tour is available for both iOS and Android devices to be used with Google Cardboard.

The virtual worlds were created in OS Labs, the OS department designated to exploring and assessing ideas for new products and services.

John Abbott, who as head of Access and Services is responsible for OS Labs, said as with the Minecraft maps of Great Britain, they thought the public would be interested in how Ordnance Survey’s data can work in the virtual world, which is why they have shared these Oculus and Cardboard experiments. The team continues the long OS tradition of constantly examining the data that’s available and its uses in emerging technologies – this to see how they can make their data offerings work better for the public, government, business and partners.

Abbott stated OS has no plans at present to create further virtual worlds, but what has been demonstrated is that it can be done, and in terms of future uses it's currently the perfect medium for visualisation. It can be used for planning, as a test environment for running scenarios. Put real-world data into the virtual world and you gain a level of experience and understanding of an environment that can only be bettered by actually being there, he added.

Both the Oculus and cardboard versions of Ben Nevis took just two days to create. For the developers (Alex Davies-Moore, an early pioneer of the uses and capabilities of iBeacon technology for geospatial Internet of Things solutions, and David Haynes, a specialist in 3D mapping and virtual reality), these virtual Ben Nevis environments have been an opportunity to bring their external interests into the workplace.

Haynes explained he has been looking into VR for a while now. There’s a natural crossover with his work in 3D mapping. There is no doubt the cardboard and especially the Oculus will quickly establish themselves as important in how we consume entertainment. The potential is obvious and massive. Gaming, film, sporting fixtures, gigs and events will be so much more immersive and better — the next best thing to actually being there. There is also a leisure market to consider. These technologies act as a passport for people who want to experience the sights and sounds of places they can’t get to, and as a planning tool for people preparing to visit these places, Haynes continued.

The inclusion of OS’s accurate data gives the virtual world an added sense of reality, and it was the adding in of the data that presented the greatest challenge, as Alex Davies-Moore said. They used Unity 3D, a well-known and easy-to-use gaming engine, and it took us a while to figure out how to get it to work with and display the data as realistically as possible. The more we play with this technology and experiment with putting real-world data into it, the more realistic these worlds will become, and so the number of commercial end uses increases.

Download the iOS version of Ben Nevis for cardboard