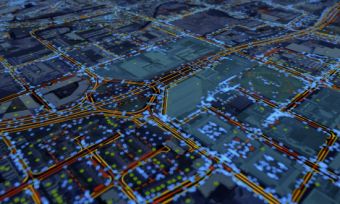 Ordnance Survey (OS) is one of 11 partners in OmniCAV, a £3.9 million project to develop a world-first artificial intelligence-based simulation model for testing autonomous car safety. The simulation environment will feature a 32km circuit of roads in the UK county of Oxfordshire, covering rural, urban, main roads and intersections. The simulation will be used to create and run different scenarios for the safe testing of connected and autonomous vehicles (CAVs) and will support certification bodies, insurers and manufacturers.

OS will lead the capture, processing and serving of geospatial high-resolution mapping data. This will include 3D geometry and information about the roadside assets and their characteristics, so that data standards and requirements can be developed for the real-world deployment and operation of CAVs.

OS used similar techniques in projects such as CityVerve, the UK’s Internet of Things (IoT) demonstrator, and in Bournemouth as a test case to produce a 5G planning and rollout tool. OS will also draw on the experience of its Atlas and E-CAVE initiatives that are helping the government shape a national infrastructure capable of supporting a nationwide network of CAVs.

Miranda Sharp, head of innovation at Ordnance Survey, said “OmniCAV is one of a number of UK government-sponsored projects that supports the position of the UK as the best place in the world for autonomous vehicle testing. Building on the unique strengths of OS capability and data, the aim for OmniCAV is to help accelerate the safe deployment of autonomous vehicles on UK roads by permitting testing in linked versions of the real-world environment and a digital one. To achieve the CAV ambition, geospatial data is key - not just to the creation of a realistic simulation environment to test in, but also to the eventual deployment of a new infrastructure to enable improved connectivity and mobility.”

The OmniCAV project is part of a wider £12.1 million UK government-funding package to support the development and deployment of CAVs.