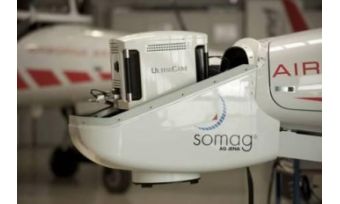 Diamond Aircraft, Austria, has introduced the new DA42 GEOSTAR that enables the collection of laser scanning and photo-grammetry data during one single flight. The team of Diamond Airborne Sensing (subsidiary of Diamond Aircraft) announced it has succeeded in perfect sensor integration on the DA42 MPP, the most economic remote sensing platform worldwide. Both systems are integrated with sufficient resources for fuel and flight crew.

Hence the GEOSTAR is able to complete incredible 10-hour survey flights with a range of up to 1,042 NM, equivalent to the flight route Copenhagen - Barcelona. At an altitude of 10,000 feet it can even collect data from areas of unbelievable 3,400 square kilometres, the size of the Spanish isle Mallorca, during one single flight only.

A photogrammetric camera, installed in a special pod on the aircraft’s nose, delivers accurate representations of the Earth's surface, so-called orthophotos (aerial photos). A laser-scanner captures the terrain topography by firing a laser and measuring the time it takes for the laser to be reflected back from a point. The result of the collected measurements is a digital terrain model in the form of a point cloud. The scanner is mounted on the belly of the aircraft in a specifically designed pod. By merging the orthophoto with the point cloud you get a precise, realistic 3D model of the object.

The GEOSTAR is particularly suited for surveying cities, land areas, critical infrastructure (such as pipelines), glaciers or snow fields, but also for mapping damages caused through natural disasters.